In this activity, you will run a script that sends a “stay still” signal to the servo motors. You will then use a screwdriver to adjust each servo so it will actually stay still when receiving this signal. This is called "centering" the servos. After this adjustment, you will run test scripts that will  turn the servos clockwise and counterclockwise at various speeds.

You’ll need a Parallax screwdriver, or a different Phillips #1 point screwdriver with a 1/8″ (3.18 mm) or smaller shaft.

If a servo has not yet been centered, it may turn, vibrate, or make a humming noise when it receives the “stay-still” signal.

Powering cyberbot.py:  If your script includes from cyberbot import* you must:
(1) Make sure that the module cyberbot.py is loaded onto your micro:bit
(2) Make sure the battery pack is plugged into the cyber:bot board.
(3) Put the cyber:bot board's 3-position power switch in position 1 or 2.  Position 1 powers the breadboard circuits, and position 2 powers the breadboard and the servo ports.

On the side of the servo is a small access hole. Inside the hole is what appears to be a small screw. This is a plastic potentiometer adjustment knob. 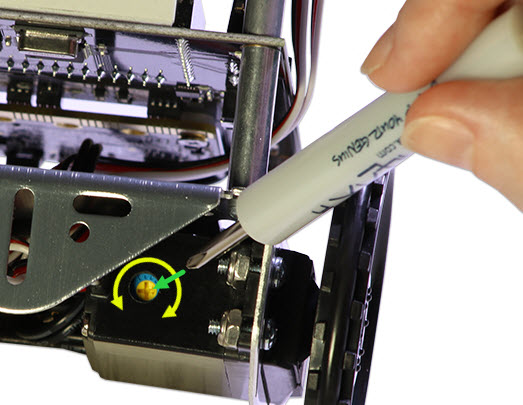 Note: If you mounted the servos so that the potentiometer access holes are facing the battery pack, you can still use a very long, thin screwdriver to adjust them.

Your Turn – Center the Servo Connected to Pin 19