The Arduino Prosthesis is a low cost Prosthetic, a Brain Control Interface (BCI) device that can be fitted on to amputees’ limbs. Mind-Waves – or more precisely the ability of the mind to focus and to concentrate – controls the Prosthetic. This is accomplished by using an inexpensive EEG (Electro-Encephalo-Gram)reader that can be worn on the head,like a pair of headphones using a headband.This external device is in contrast to current expensive devices that require an implanted electrode in the arm or leg and require training for effective usage. Also, some of the more expensive prosthetics require myo-electric impulses to control the actuators.

The Arduino Prosthesis is an upper-extremity prosthetic arm that uses a microcontroller to measure the brainwaves registered by an EEG headset, and has servos in the arm and wrist bend the elbow and the fingers of the prosthetic hand based on those measurements. The prosthetic can be from twelve (12) to eighteen (18) inches long. It uses signals from the brain to affect the function of the arm. The components are open-sourced and low cost: an Arduino microcontroller communicates with a Neurosky Mindwave EEG headset. Futaba servo mechanisms control the bending of the elbow and the fingers, which, along with the arm, are made from acrylic. When the user concentrates hard enough, their brainwaves cause the arm to rotate and flex the fingers.

The microcontroller is an Arduino device, a fully open-sourced microcontroller for which schematics, programs, and modifications can be found across the Internet. There are multiple models, and several different accessories are available for each. The various models are usually only $30, and can be programmed with a programming language similar to C. Programs available on the Internet provide additional features, such as software serial ports or the ability to connect multiple microcontrollers.

The Arduino Prosthesis is a significant innovation because it is less expensive than other prostheses, and can be expanded beyond its original parameters. As the components are not expensive, it is open to multiple iterations in its design. It can be expanded to have extra control and sensors incorporating touch sensing and force sensing. If something should happen to it, the microcontroller and servos can be quickly replaced, and the rest of the arm can be repaired or restored to its original specifications. The modularity also means that as the user grows, the electronics can be shifted into a larger arm housing without much difficulty. The open-source nature of the device allows any person with Internet access to share their knowledge of how to improve the device, thus drawing upon the collective knowledge of experts around the world.

This is an impressive achievement for anyone, not just a high school student. 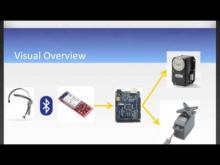