Coop Boss (Chicken Coop Management with a Propeller and SmartThings)

It was the first warm evening of spring and I just sat down to watch TV after dinner.  I picked up my iPad and tapped the link to our chicken coop’s web cam.  Instead of the usual bobbing heads of sleeping chickens I only saw one chicken and noticed the coop’s floor was covered with feathers.  With a gasp my wife put down her Kindle and stood up asking, “WHATS WRONG?” as she could tell by the look on my face something horrible had happened.  That night we both forgot to close the coop door and a mink got into the coop and slaughtered her chickens.  The mink walked right up the ramp and pulled three of our five chickens off the roost one at a time and just ripped them apart.  She has had those chickens for three years and they have supplied my lunch for most of that time.  Each chicken had a name and she spent time with them every day rain or shine.  I felt horrible, as I built the coop to protect the chickens and it let her and the chickens down.

At work I have been working on several Propeller / ZigBee Home Automation projects and thought it wouldn’t be a huge effort to modify existing hardware and software to automate the coop’s door.  Well, a few days later I had a working prototype that allowed her to user her iPhone to remotely control the coop door and automatically close it if we forgot to do it.  The next day she came home with five, one week old baby chicks and put them in the garage under a heat lamp in a tub.  The chicks would be in the garage for about four weeks before they would be moved to the coop.  I used that time to come up with a solid solution based on my prototype and the Coop Boss was born.

DipTrace Schematic files are in the included zip archive. All code is available upon request. Please send an eMail to John.Rucker@Solar-Current.com. 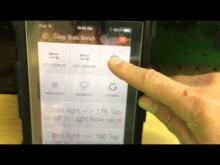 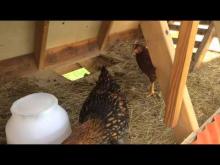