In the USA Network drama series “Covert Affairs,” Christopher Gorman plays August Anderson, an ex-Army officer blinded while on a mission in Iraq.

Even though he is still grieving his injury, he doesn’t let it slow him down.  Auggie cruises the fictional halls of CIA headquarters with the aid of a high-tech laser cane.  Alas, Auggie’s cane is Hollywood magic with a guestimated cost of 5-10 thousand dollars.

The blind man’s cane is used to detect objects so that the operator can avoid a collision.  The typical white cane is constructed chest high (55 inches) and is held in front of you.  It is moved back and forth to detect objects, walls, curbs, etc.  An alternative to the wooden cane is a collapsible cane.  The collapsible cane can be stored more easily but is heavier and shorter than the standard cane.

The fields of robotics and automation have been trying to accomplish similar goals for years.  Without a human in the loop, how can a machine detect an object and avoid it?

The soniCane is amazing, fun and useful. This was a very well engineered and useful effort. 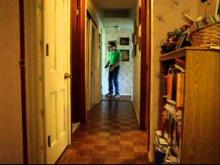