Webz of War is a cooperative two player exergame utilizing a Microsoft Kinect, two Nintendo Wii Balance Boards, two microMedic heart rate monitors (one from the kit, one special ordered), and a controller PC. The innovative composition of the game system emphasizes the use of heart rate to control the attack power of players as they encounter robot spider villains in the subway tunnel system. Heart rate is also used to track players' cardio workout: Webz of War is designed to be a fun experience which also delivers an effective workout in a way that is so engaging that the workout becomes secondary to the player, causing them to work more vigorously.

The game was built by CardioActive, a team of graduate students from the Entertainment Technology Center at Carnegie Mellon University. It was built for, and in cooperation with the Telemedicine and Advanced Technology Research Center. The specific purpose of the project was to find ways to get those who are not accustomed to exercise up and moving. The CardioActive team decided that three things were essential to achieving this goal: Make the heart rate an integral part of raising your ability to win the game, track the entire body (including weight shifting) so physical activity is required to achieve certain goals, and do it all in the name of fun.

At the beginning of Webz of War, the player steps onto the Wii Fit Boards to trigger the start. They are led through a short tutorial by an “other worldly” voice, after which they find themselves in a tunnel covered in webs. In this tunnel, the player can duck under the webs or wiggle side to side to get out of them. They can also collect ammunition by reaching up or down, all of which raises their heart rate as recorded in playtests and the heart rate graph embedded in the game. They eventually find themselves in a terminal where they battle an onslaught of robot spiders. The game ends in a final battle with a large and menacing spider in the final terminal.

Great animation and a professional look and feel! 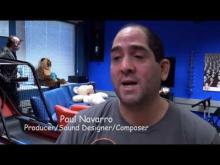 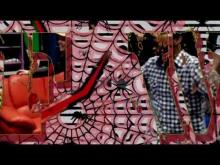