The ePaper initialize block is used to set up the Color ePaper display module. The DIN, CLK, CS, D/C, and RES pins on the module must be matched to the Propeller I/O pins they are connected to.

If you forget to use this block in your project, other ePaper blocks will display a triangle warning symbol. Click the triangle, and you will see a reminder message to use the ePaper initialize block at the beginning of your program.

Because the ePaper library uses an image buffer, the ePaper update block must be used to draw to the ePaper screen.  This block sends anything that has been drawn to the buffer to the display since the previous time this block was used.

The ePaper command block permits you to choose and execute the command selected from the drop-down menu:

The ePaper print number block is used to send numbers to the ePaper module. Numbers can be displayed as a decimal, hexadecimal, or binary.  Nothing will appear on the ePaper display until an ePaper update block is used.

The ePaper print multiple block can print several terms of different types on a single line. Click the gear icon to drag additional terms into the list, then attach appropriate values to the block.  Options are:

BlocklyProp uses integer numbers. The floating point number option allows an integer value to be displayed as a decimal number.  Use its drop-down menu to divide the integer by a multiple of 10 to scale and display the number appropriately. The specify digits checkbox activates an additional field by each numeric term.

Nothing will appear on the ePaper display until an ePaper update block is used.

The ePaper draw line block draws a line from the first coordinate to the second coordinate in the color defined by the color block.  Nothing will appear on the ePaper display until an ePaper update block is used. 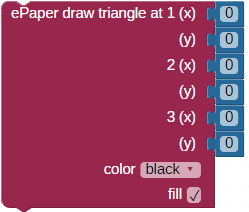 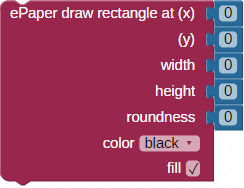 The ePaper draw rectangle block draws a rectangle from the first coordinate (top left corner of the rectangle) to the second coordinate (bottom right corner of the rectangle) in the color defined by the color block. The “roundness” value, if set to something other than zero, will round the corners by the amount specified (radius of the roundness). The “fill” checkbox sets whether the rectangle will be drawn as hollow or filled.  Nothing will appear on the ePaper display until an ePaper update block is used.

The ePaper draw circle block will draw a circle whose center is set by the first two value blocks, and in the color defined by the color block. The “fill” checkbox sets whether the circle will be drawn as hollow or filled.  Nothing will appear on the ePaper display until an ePaper update block is used.

Displaying bitmap images from an SD card is SLOW!  It will take approximately 45 seconds to draw a bitmap that fills the screen to the ePaper module.  While it is drawing, it will look like nothing is happening.

The ePaper Bitmap block will draw a bitmap (BMP file format) saved on an SD card attached to the Propeller microcontroller.  When using the board type for the Activity Board and Activity Board WX, which have built-in microSD card slots, the SD card is automatically initialized when this block is called. When using the FLiP or other board types, you will need to use the SD initialize block at the beginning of your program.

The bitmap/BMP file must have the following requirements met:

The following online file converter https://image.online-convert.com is able to create BMP files from nearly any kind of image. This online tool can also be used to resize the image to ensure that it will render properly.

On the ePaper display, the image will be drawn as black and white. If the original file was in color, the average luminosity of the pixel will be used to determine if that pixel is drawn as black or white.  One way to make a color or greyscale image to appear well on a black and white display is to use a dithering tool.  One is available online here (note that it does not produce BMP images, so its output will have to be converted): https://29a.ch/ditherlicious.

Nothing will appear on the ePaper display until an ePaper update block is used.