Compatible with all Propeller board types (except Scribbler Robot).

The NUMBER operator blocks can accept number value blocks, and any other operation blocks or sensor blocks that provide a numerical value.

The math operation block performs a mathematical operation on the inserted value blocks. Non-integer (fraction or decimal) results will be truncated to an integer. Choose an operation from the drop-down menu: 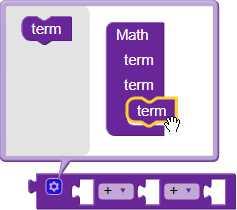 To change the order of operations, nest operation blocks inside each other, and/or use the Parentheses block (below).

The limit block allows you to compare the inserted values, and use the highest or lowest value as chosen in the dropdown menu.

The constrain block prevents a value from being too large or too small before using it. Insert a value or variable item, and then enter the maximum and minimum values for the range you want that value to stay within before it is used.

The de/increment block increases (increment) or decreases (decrement) the variable attached to it by 1.

The random block provides a random number between the first inserted low value and the second inserted high value. The first number must be smaller than the second number. If they are not in that order, the resulting random value may be unexpected, such as a number outside the range specified.

The bitwise block performs a bitwise operation (& AND, | OR, ^ XOR, >> right shift, << left shift) on the two values inserted.

The not block performs the selected operation on the value attached and provides the result. The options are:

The parentheses block surrounds the enclosed block(s) with parentheses. Use parentheses to change the order of operations in a series of blocks.

The compare values block compares two inserted values and provides a boolean value, 1 if the equation is true, and 0 if it is false. Choose the type of comparison from the drop-down menu:

The map value block scales and offsets the inserted value from the first defined range to the second defined range.  This block does not constrain the value that you've entered.  For example, given the ranges as shown in the block above, if the value you enter is -5, it will output -10, because the block is asking the new range to be twice the original range.

The advanced math block performs a trigonometric, exponential, or logarithmic function on the inserted values, and stores the result in a variable. Angles are in integer degrees, not radians. Options are:

Since Blockly is working only with integer math, the block requires you to begin with a multiplier (the first inserted value). Although you could use 1 here, larger numbers make this block more precise.

The inverse trig block performs an inverse trigonometric function. The angles that this block calculates and stores are in integer degrees, not radians. Options are:

Because inverse trigonometry operations usually are done on ratios (one number divided by another, the block requires you to input both the numerator and denominator of the ratio.  If you need the inverse trig operation of a single number, use 1 as the denominator (the second number).