Resistors resist the flow of electrical current.  Each one has a value that tells how strongly it resists current flow.  This value's unit is the ohm, often noted with the Greek letter omega: Ω.

The colored bands on a resistor can tell you everything you need to know about its value and tolerance, as long as you understand how to read them.  The order in which the colors are arranged is very important, and each value of resistor has its own unique combination. 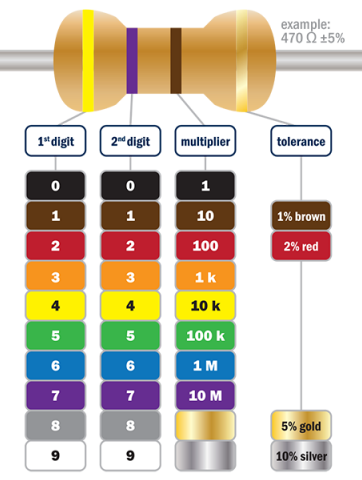 Here is an example that shows how the table and resistor shown above can be used to figure out a resistor value by proving that yellow-violet-brown is really 470 Ω:

Although the first two bands are fairly straightforward, the third and fourth bands might require a bit more explanation.

Resistor values can get to be very high in number, and there often isn't enough space to use a band for every digit.  To get around this, the third band indicates that a certain number of zeros should be added after the first two digits to make up the full resistor value.  In the example above, the third stripe is brown, indicating that a single zero should be added to the right of the first two digits.

If you want to go deeper into the math, this third band is officially referred to as a multiplier.  The color of the band determines the power of 10 you need to multiply the first two resistor digits by. For example an orange third band with a digit value of 3 would indicate a multiplier of 103, though you can also just think of this as telling you to “stick 3 zeros on the end".

Notice that however you decide to think about it, the result ends up being the same.