RFID stands for Radio Frequency Identification.  The Parallax RFID Reader Serial + Tag Sampler includes several unique RFID tags. This tutorial will show you how connect the RFID Card Reader to the Propeller microcontroller.  Then, it will show you how to read a tag’s ID number and use that data in a program. 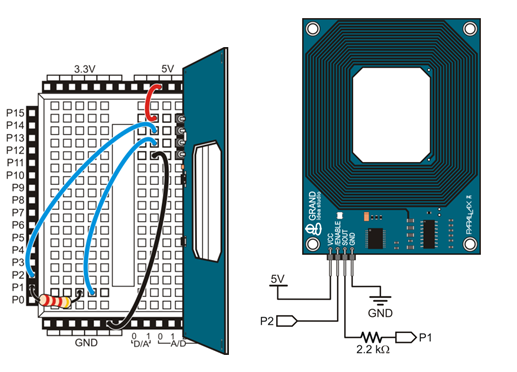 This circuit and test code will work with any Propeller development board that has a prototyping area.

Each tag’s ID number should appear in the SimpleIDE Terminal. If no tag is detected within one second, you will see “timed out” until a tag is detected.

First, the program includes the simpletools and rfidser libraries.  The rfidser library gives us access to the rfid_open and rfid_get functions, along with other conveniences for communicating with the RFID reader.

Next, the program declares two int values, giving names to the two Propeller I/O pins that are connected to the RFID Reader.  Later, these names will be passed to parameters in a function call.

The last two lines are inside an infinite while loop. The first line gets the tag ID from the reader (if one is detected) and the second line prints the tag ID in the SimpleIDE Terminal.

Let’s look closer at those two lines.  The function call rfid_get(rfid, 1000) is listening to the device we named rfid for 1000 ms.   This function returns the tag’s ID number if one is present, or the phrase “timed out” if no ID number is received within 1000 ms.    On the other side of the equal sign, char *str names a pointer to a place in Propeller memory to start storing the characters returned by the function call.

The print function call uses the %s formatter to display str.  This formatter will print a character string stored in memory, starting at the address named str.  The character string will display as a tag ID or the phrase “timed out” on a new line each time through the loop.

Passive Tags — These tags are passive, meaning they do not have a power source of their own inside. Instead, an embedded antenna circuit inside the tag gathers a tiny bit of power from a magnetic field generated by the Reader.  Holding the Reader close to the tag powers it just enough to send its ID number back to the Reader.

Keep it In the Family — The Parallax RFID Card Reader works with the EM4100 family of read-only tags.  This reader will not work with tags from other families, nor can it write data to RFID tags.

When RFID tags are used in access systems, the usual goal is to find out if a tag’s ID is known to the system, so the appropriate action can be taken.  The next example program uses if...then...else to take a different actions based on a tag’s ID.  First, you will need to write down your tags’ ID numbers.

Now that the program recognizes both tag IDs and takes separate actions for each, you can modify those actions to make the application more interesting.  The rfidser library has an rfid_disable function that will make the RFID reader ignore tags until you either re-run the program or call the rfid_enable function. Let’s modify the program to go into lock-down if Tag B is detected.

Disable vs Close, Enable vs Open.  rfid_disable does not shut down the Propeller core running the RFID reading process that was launched with rfid_open.  Reading can resume with rfid_enable.  If you want your application to stop reading tags and also free up the Propeller core and memory that it is using, shut down the process entirely with rfid_close.   If your project needed to read tags again after that, your program would need to call rfid_open to re-start the RFID reading process again in another core.