With your IR object sensors built and tested, you are ready to make your ActivityBot roam and avoid obstacles without bumping into them.

Remember, not all obstacles are visible to this infrared system.
Many dark colored objects will absorb infrared light instead of reflecting it.  If in doubt, use your LED indicator program from the previous page.  The red LEDs on the breadboard will show you if an object is visible to the IR object detectors. 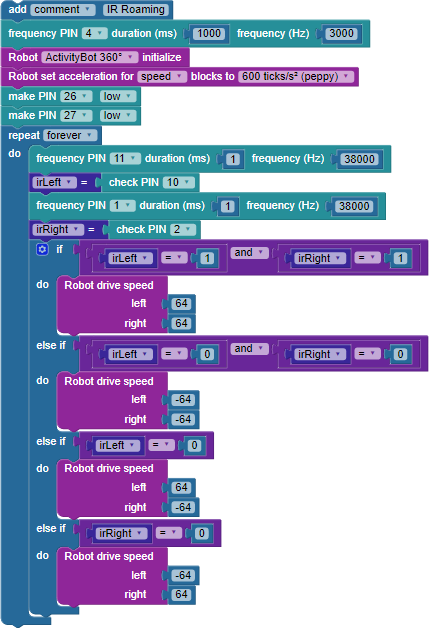 Your ActivityBot should promptly turn away from your hand and roam in a different direction until it detects another obstacle.

How the IR Roaming Code Works

The project begins with the now familiar frequency out block for the piezospeaker brownout alarm on P4. Next comes the required Robot ActivityBot initialize block, and a Robot set acceleration block. As we learned from previous projects, 600 ticks/s2  is a moderate acceleration value that works well with the Robot drive speed block's default value 64.

Remember that the make PIN...low blocks for P26 and P27 are needed to connect the IR LED cathodes to ground.

The rest of the code blocks are in a repeat forever loop. The next four blocks are the same as in the IR Detectors project. For each IR LED/Receiver pair, a frequency out block sends a 1 ms pulse of infrared light at 38 kHz; then a check PIN block immediately stores the IR receiver's response in a variable.  The variables irLeft and irRight will each store a zero if that receiver detects an infrared reflection off of an object, and 1 if no object is detected. (Remember, the IR receivers are set up as active-low circuits.)

A single if...do block with four conditions and potential actions makes up the rest of the repeat forever loop.  Those conditions check the combined state of the irLeft and irRight variables. The possible conditions are:

The conditions are tested one at a time in order. The first condition that is true runs the code in its ...do section, and then the program flow returns to the top of the repeat forever loop.

The first if... condition uses a boolean comparison block to test whether it is true that both irLeft and irRight variables are storing a 1.  That means neither IR receiver detected an object, and the ActivityBot can drive forward with Robot drive speed left 64, right 64.

The second if... condition also uses a boolean comparison block to test whether it is true that both irLeft and irRight variables are storing a zero.  That means both IR receivers detected an object, and the ActivityBot can back up with Robot drive speed left -64, right -64.

If the first two conditions get skipped, it must mean that the two variables are not storing the same value. So, the next two conditions test each variable alone to see if either one detects an object.

The third if... condition checks whether irLeft is storing a zero.  That means an object is detected on the left, and the ActivityBot can turn right to avoid it with Robot drive speed  left 64, right -64.

The fourth if... condition checks whether irRight storing a zero.  That means the an object was detected on the right, and the ActivityBot can turn left to avoid it with Robot drive speed  left -64, right 64.

Conserving Conditions — Since this project has only four possible conditions to check for, your if....do loop did not really need to test for the fourth. Logic tells us, if the first three conditions are false, the fourth condition must be true. So the last else...if in the if...do loop could have just been an else containing the Robot drive speed left -64, right 64 block.

Compact vs. Easy to Read — Using all four conditions is an example of building code so that it is easy to understand, rather than as short as it can possibly be.  When you are first developing a project, it can be helpful to make the code as easy to understand as possible. Then save a copy, and work on making it more compact by eliminating blocks that are not necessary.  However, if you will be sharing your code, or if it is a very complex project, it may be wiser to keep it readable.

Adding visible light feedback for the IR recivers can help you understand what is happening if your robot seems to behave in unexpected ways.

If your sensor input, light and motion output system logic is now working well, it's time to tune it for performance.  Your goal is to get your ActivityBot navigating as rapidly as it can without running into objects or doing nose-wheelies.