Complex projects are always built in small steps. With microcontrollers, these challenges are best being divided into small pieces with consideration to the outcome. This means you’ll be programming and testing in small steps, saving your programs along the way in case you need to roll back to a prior version. Therefore, let’s start by simply pointing the ActivityBot 360° towards a single color signature which centers the colored object in the middle of the display using its X or Y position.

These are the steps:

Here is an example with a single red block and LED lamp ON. 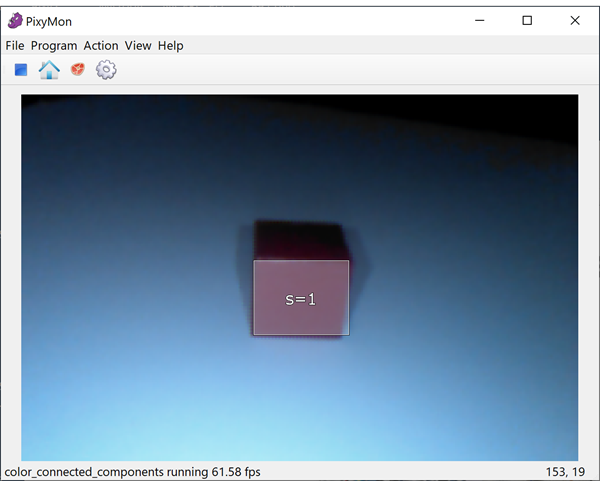 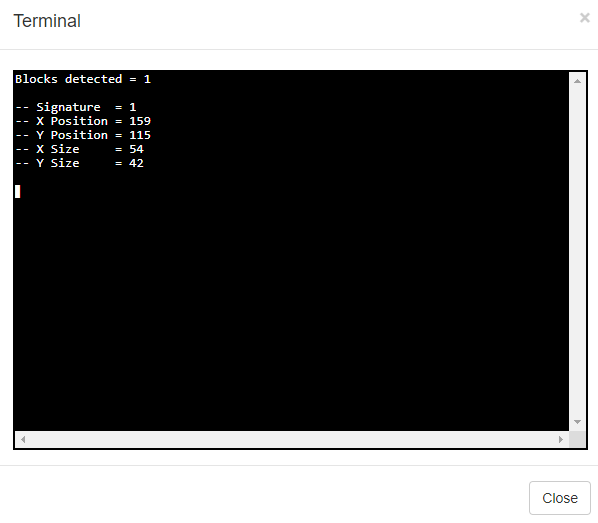 With a single colored block which has an associated signature assigned in PixyMon, we can program the ActivityBot 360° to point towards the block. Suppose the red block is positioned either left, center or right in the Pixy2’s view. Three simple cases could mean three different programming actions!

The variable bXpos in the “show_signatures” function of Pixy2DisplayTerminal.svg shows where the detected color signature is from the Pixy2’s point of view. The values of bXpos will range from 1 (far left) to 316 (far right).

One easy coding approach would be an IF-ELSE block that evaluates bXpos and either turns left or right towards the block at full speed.

But this is a very clunky control method. A simple full-speed, on-or-off control loop that quickly “startles” the ActivityBot 360° towards the red block, possibly over-shooting the goal of centering the block. 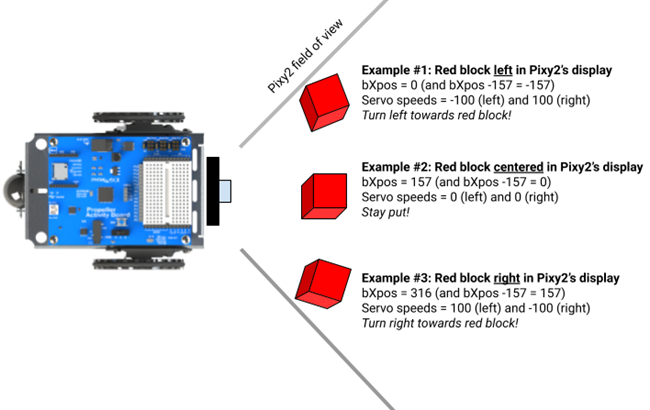 Proportional control is a much more suitable approach. With proportional control, the desired drive speed depends on the distance of the red block from the middle of the Pixy2’s view. If the red block is far left, the robot would set the servo speeds to fast, to move toward the red block aggressively. But if the block is only a few pixels left of center, the robot could respond with a slow-speed driving command to the left. Once the block is centered in the camera's view, the robot will calm down and remain still, making only small adjustments to the speed until it stays still.

Let's review the numbers we’re working with before we look at the code modifications:

We can use the value of bXpos to calculate our servo motor drive speeds. If the red block is on the far left (Example #1 above) and we subtract 158 from the bXpos variable, bXpos s now -157. This is a large number to use as a servo speed, so we’ll divide it by 3 and it’s now -52, a number we can use to drive a servo. This is very convenient, so we’ll use -52 on the left servo motor (to turn it backwards) and the positive value (multiply by -1) of 52 on the right servo motor. This will cause the robot to turn left, towards the object.

Your Turn: Program the ActivityBot 360° To Point Towards Color Signature 1 on Y-Axis

Using the same approach, you can modify the BlocklyProp example code to drive near or away the colored object, centering it in the middle of the Y-axis display of the Pixy2.