Drive There and Back Again - Using Speed Blocks

Now that you've tried basic driving with the S3 robot, you will be ready to move on to slightly more complex motion commands. Start by taking a look under the ACTIONS > MOTORS block category, locating the drive speed block.

Take a close look at the two large wheels on the left and right side of the robot. Each of these is attached to a gear motor inside the plastic case. The rear tail wheel is not powered, but it does monitor whether the S3 is moving or stalled (more about that later).

The drive speed block has three parameters (values) you may enter: 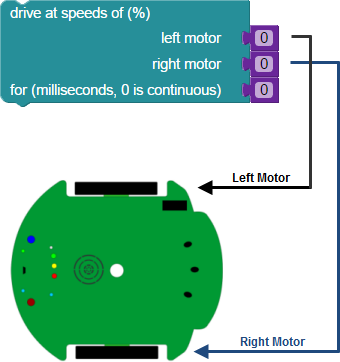 Setting the right motor speed and left motor speed for the same value over a certain duration would cause the S3 to travel forward or backward in a straight line. Small changes in direction might occur on a tile floor or carpet because of friction, small obstructions, uneven, or sloped surfaces encountered along the way. Variations like these, or wheel slippage could keep us from arriving perfectly at our intended destination.

The Physics of Motion

When studying the physics of motion, you often learn that there can be some variation between theory and real world conditions. An example of this idea is that you might ignore the effects of friction or air resistance when doing theoretical calculations, yet when you start looking at real-world examples, these forces remain present and cannot be ignored.

Your S3 robot operates in the real world, therefore you will encounter variation in the way it moves at different speeds and on different surfaces. This is due in part to the way the S3’s motors respond at various speeds, changes in current, internal resistance,  friction - even changes in the gear lubrication over time. As noted above, different sloped or irregular drive surfaces may also cause changes in observed movement.

Put plainly, this means that there will be noticeable differences in your S3's motion as you drive at different speeds and on different surfaces. Do not mistake these variations for limitations. The S3 is quite capable of moving very exact distances and directions. This does mean that some ways of controlling the S3’s movement are more accurate than others, as you will discover in future tutorials.

Let’s look at an example.

You are probably familiar with the equation d = rt, which shows that the distance your robot travels is a function of how fast it is moving and for how long. While you can use a variety of units in this equation we’ll keep it simple was below:

The following two blocks both result in the S3 arriving at the same destination – just at different times. This is theoretically what should happen... but we operate in the real real world. Differences in how the motors respond, variations in driving surface, or other conditions that cause friction or slippage make this approximately true.

Putting these values in the d = rt formula as below demonstrates this idea.

According to this equation, an S3 programed with a drive speed value of 50% can travel the same distance as an S3 with a 100% drive speed value, simply set the duration for twice as long. Further along in this tutorial, you will experiment with this process and you will be able to observe the real world variations that can occur.

Some food for thought as you experiment with navigation programs: a slower moving robot is often more precise and easier to control than a fast moving one since it has less abrupt changes in speed.

The Mars Science Lab, MSL  - Curiosity Rover is in its 5th year of exploration on Mars. Based on variables including power levels, terrain difficulty, slippage, and visibility, the maximum terrain-traverse speed is estimated to be 200 m (660 ft) per day using automatic navigation. It can travel up to 90 meters (300 ft) per hour but the average speed is 30 meters (98 ft) per hour.  Source: https://en.wikipedia.org/wiki/Curiosity_(rover)

To be fair to the Curiosity Rover though, the surface of Mars is more difficult terrain than our home or classroom floor or tabletop. Of course, Curiosity doesn’t have a pen port for a Sharpie® either!

The drive speed block can be used in two different ways: with or without a duration value. When a duration value greater than zero is used it's considered a blocking command. This is because the S3 does not proceed to the next line of code until the duration value has elapsed.

When a duration is not set (that is, left at the default of zero), the motor direction and speed are maintained forever or until changed by another block. This is referred to as a non-blocking command. 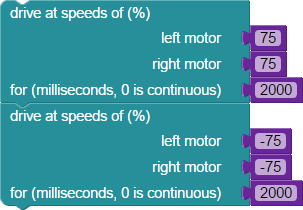 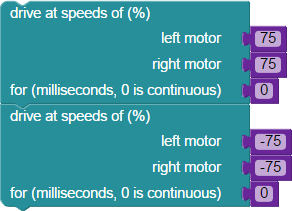 You will learn as you continue to work with your S3 which movement control methods work best and most accurately in certain conditions. Non-blocked driving commands are more useful for sensor-based navigation, where the S3 must respond immediately to changes in the physical environment. Examples: light-following, line-following, or object detection and avoidance with infrared sensors. 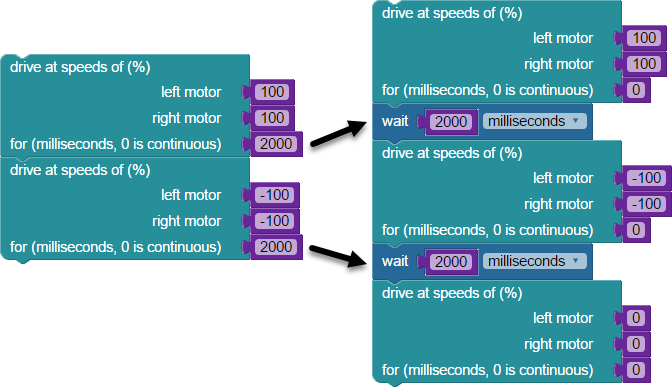 You may have noticed the third drive speed block on the program on the right. This block is necessary in order to tell your robot to stop. In an earlier tutorial you learned that the wait block means pause, but it's a bit more complicated than that. Picture a light. When you slip the light switch on, the light turns on. And while it waits for the next command, it continues to follow the previous ON command. Then you flip the switch off, and the light turns off. Again it waits for the next command, continueing to follow the OFF command. All while the motor itself is still running. The third drive speed block is in place and set to zero in order to stop the motor entirely.

Here is an example: 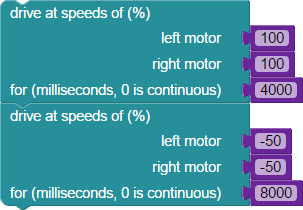 How did your S3 perform? Did it return to the exact spot where it began?  What factors did you have to modify to make your S3 return to the exact spot? Remember that however you have to vary your settings to have the S3 drive forward and backward to the exact point, the formula above applies.  Distance (d) = rate (r) x time (t). Using exactly ½ speed (100% and 50%), how close does your time come to being double? Using exactly double the time (4000 ms and 8000 ms), in what way does your speed setting have to change to start and end at exactly the same spot?

Engineers, programmers, and roboticists often keep notebooks (digital or paper) of experiments and/or the results of tests, designs, or methods of doing something as they work. For example, many electronics hobbyists know of Forrest M. Mims III’s  wonderful Notebook series.

It is a great idea and helps you remember what you’ve done, what worked, and what did not. Try to get into this habit in your own work.

It is always true that distance (d) = rate (r) x time (t) when given perfect conditions with no friction or other challenges. Since our conditions are not perfect, let's record your results for the Try This example shown above in a chart like the one below. This should give you an idea of how the ideal varies from your actual real world results.

The S3s drive speed settings, 0 to 100% (+ for forward movement and - for reverse movement), have some real world limitations. The relationship between 25%, 50%, 75%, and 100% drive speeds are not exactly proportional in the real world. There is, of course, a speed setting (based on specific conditions) that is exactly half of the speed setting of 100%. The percentage settings in the drive speed block are good approximations, but they are approximations. This means that if you need the S3 to drive at half-speed, you will likely have to test a few different speed settings in order to get it right for your environment.

Note: Remember, as stated above, that there are more accurate ways to control the S3’s movement and that these methods will be covered in other tutorials.

For now, let’s continue to experiment...