Some of the most exciting BASIC Stamp applications can be accomplished with Radio Frequency (RF) transmitters and receivers.  The best part is that RF communication is all around!  Every time you listen to the radio, use a cell phone, or watch television, RF transceivers are at work.  RF communication uses radio waves instead of wires for exchanging signals, which is where the name “wireless communication” comes from.  RF modules use frequencies (measured in Hz) to distinguish different radio signals, so in order for RF modules to “talk”, they must be operating on the same frequency.  This activity uses the 433 MHz Parallax RF Transceiver modules.  The modules have a transmitter that sends signals using radio waves that oscillate at 433 MHz, and a receiver that is tuned to the 433 MHz frequency, so a pair can communicate with each other.

Figure 1 shows an example of this exchange. Since the baud rate is 2400 bits/second, each high/low signal has to last for 1/2400 of a second. Inverted means that every binary 1 is transmitted as a 0, and vice-versa, and 8-bit means that each message has a byte’s worth of information (8 bits).

Figure 2 - How Data is Transmitted Serially 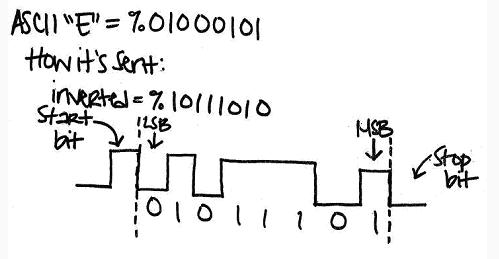 So we’ve covered transmitting serial data when two BASIC Stamp modules are connected.  What if we want them to transmit the data wirelessly, like we will in the following activity?  Does the theory change completely? Not at all. In fact, you can simply replace the wire with an RF transmitter and receiver, and the two BASIC Stamp modules can still exchange data as though they were using a wire.  Figure 3 shows how this works.  The only difference is that the transmitter gets data from the BASIC Stamp and sends it out through an antenna and into the air via radio waves, and the receiver module demodulates the radio signals back to wired serial signals and transmits them to the receiving BASIC Stamp.

Figure 3 - How Data is Transmitted Wirelessly

Schematics and Building the Circuits 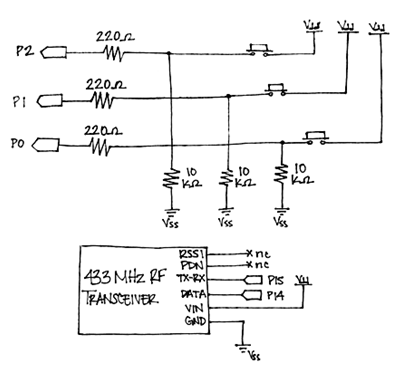 A Wireless Musical Keyboard Project chapter How the Keyboard Works