How to Create a Simple Library

Imagine you have created an interesting application.  Along the way, you discovered that your code needed to repeat a number of certain tasks frequently, so you put those tasks into functions.  Now those functions are easy to re-use, and your code is tidy — great job!

But what if you want to use those handy functions in your next interesting application?   You could copy and paste them from one applciation to another every time you want to use them.  But there's a better way: create a simple library for them.  Then, you can include that library in the beginning of any future program, and call any function in that library in much the same way you’ve been calling pause, high, low, and other functions from the simpletools library.

Make sure you have at least gone through the Propeller C – Start Simple and Propeller C – Functions tutorials before continuing here.

Start with an Awesome Test Application

Start with some working code that has functions you might want to reuse.  Here we have a very simple application with two functions to append whomever’s name you have printed with “is awesome!\n” or “ is epic!\n”.

Before moving the awesome and epic functions to libraries, let’s test this code to make sure it works.

Alright, so we have working code with two functions that are destined for a simple library. After creating an awesome library, you won’t have to keep the forward declarations and functions in your code any more.  They’ll be neatly tucked away in the awesome library, and all that you'll have to do in order to access them will be to add #include “awesome.h” to the beginning of your code.

Create the libawesome Folder and Project

The first step to creating a library named awesome is to save your application as libawesome inside a folder named libawesome.  This folder has to be located in the Simple Libraries folder for SimpleIDE to access it, and to keep things neat we’ll place it all in a subfolder named My Libraries. 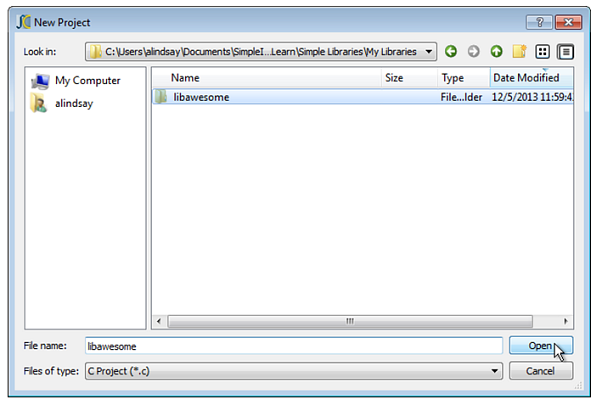 This should create a libawesome project.side project file and libawesome.c soure inside the libawesome folder.  Both files must be there in the right place for creating the simple library.  This is an important step, so let’s double-check that before moving on. 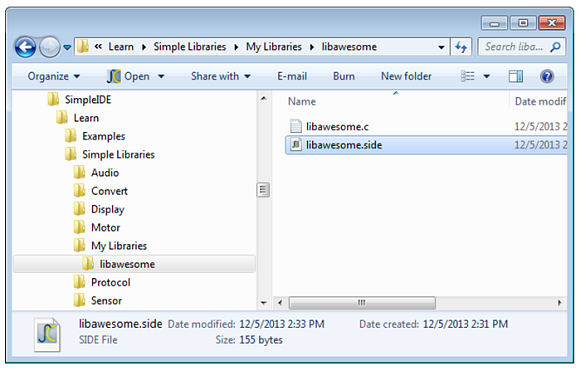