For best results, always test navigation and sensors separately before combining them in a robot app.  Earlier, you built test programs that made the SumoBot perform a variety of maneuvers, so navigation testing is already done.  Here, you will build a program that tests the values the QTI sensors measure and verify that they can detect the difference between the black and white sumo ring surfaces.

This first test will verify that your SumoBot robot’s QTIs return measurements that fall in the right ranges for indicating that they are over black or white surfaces. 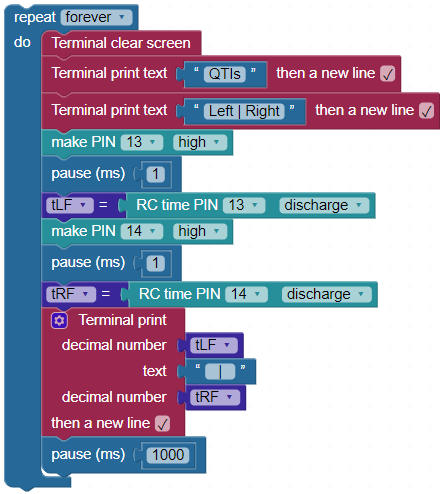 It’s important to have a safety margin above and below that 230 threshold to identify black and white surfaces.  For example, it would be best to ensure that white detection measurements are below 115 and black detections are above 460.

The height of the QTI’s light sensor surface above the sumo ring can have a big effect on the values.  To adjust the QTI height, you can either adjust the plow height or add/remove nylon washers between the QTI and the standoff (or both).

The QRD1114 sensor’s datasheet actually says that the peak response is between 20 and 30 mils (thousandths of an inch).  It’s not a good idea to mount it that close to the surface of the sumo ring because its sensitivity drops abruptly below 20 mils, but it declines gradually over 30 mils.  Since the SumoBot could end up being pushed downward during a match, it’s better to have it riding higher above the surface than the datasheet specifies to make sure no incorrect measurements are reported.  These factors and some additional testing all came into consideration when deciding on a 1/16 inch recommendation.

The make PIN 13 high block sends the high signal, and the pause (ms) 1 keeps that signal high for 1 millisecond, which is 1/1000 of a second.  After that, the QTI is charged and ready to send the high signal back for a time that indicates reflectiveness of the surface.  Next, the RC time PIN 13 discharge block makes the Propeller FLiP stop charging the QTI, and then measures how long the QTI continues to send that high signal back to the pin.  It stores that microsecond (millionths of a second) time measurement in a variable named tLF.  tLF is an abbreviation for time-left-front.

The same process is repeated for tRF and the QTI connected to P14.