How the Centering Program Works

The topmost block is called a comment. It’s a block where you can notes that don’t have any other effect on the program.  This comment just contains text to record the Project name.

There are two CR servo PIN speed blocks in the program.  CR stands for continuous rotation, which is different from the Servo block, which is made for a standard servo that simply holds certain angles instead of turning at certain speeds. 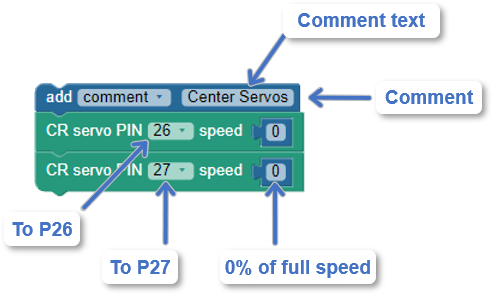 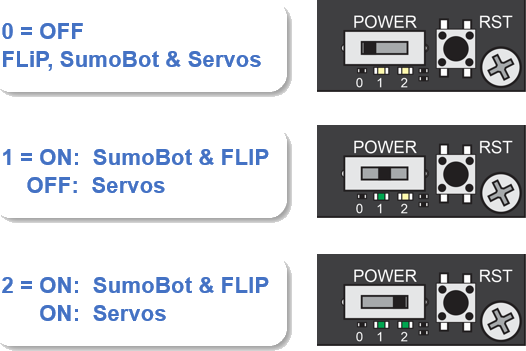 You will typically use POWER 1 to load programs at your computer.  Since the POWER 1 doesn’t supply the servos, it will prevent your SumoBot WX from trying to roll away and off the table when the code starts.

If you used the Load & run (store in EEPROM) button to load the program into the SumoBot, you can take it to your SumoRing and then start the program from the beginning like this:

After you release the reset button, the program will start from the beginning.

The signal that controls a servo’s speed and direction is a brief high signal that has to be repeated every 20 ms.  That’s 50 times per second.  The stay-still signal stays high for 1.5 ms and low for the remaining 18.5 ms.   If you connected a light emitting diode (LED) circuit’s input to the P26 pin and the other end to ground, the light would glow during those brief 1.5 ms high signals and stay off the rest of the time. 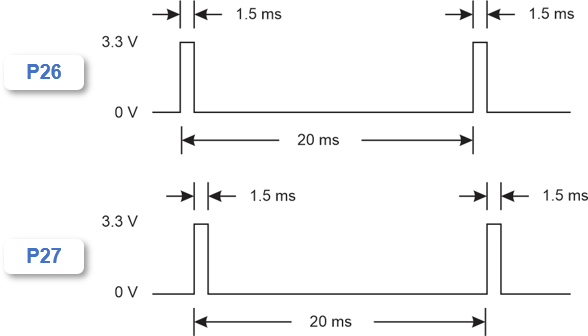