Try This: Time and Distance

Each maneuver involves two wheel speeds and an amount of time.

To decrease the distance of a forward or backward maneuver, you have a choice of decreasing either the speed or the time.  Likewise, distance will increase with either a longer time traveled or a higher speed.  Increasing the speed to increase distance only works if the servos are not already going at top speed though.

Turns can also be greater or smaller angles, and speed and time are the two variables that can be adjusted.  If speed remains the same, but time is reduced, the angle turned will be less.  Alternatively, the maneuver time can be left unchanged and the wheel speeds can be increased or decreased for smaller or larger angle turns.

When the SumoBot can “see” its opponent, top speed maneuvers to either start pushing or get out of the way are common.  If the SumoBot is searching for its opponent, it is sometimes better to move slower while scanning left and right with sensors.

Let’s take a closer look at how changing the maneuver times changes the distances traveled and angles turned. 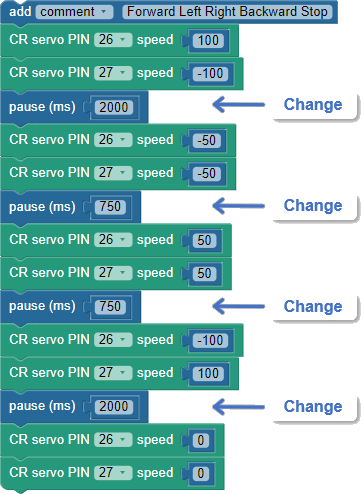 How the Maneuver Code Works chapter Your Turn: Maneuver Challenges