Now it is time to test the QTI sensors. 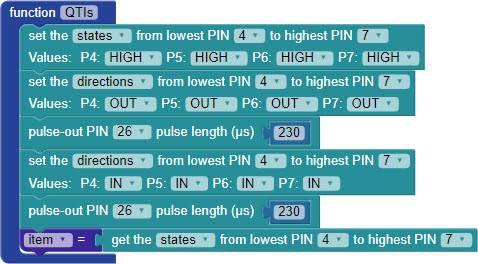 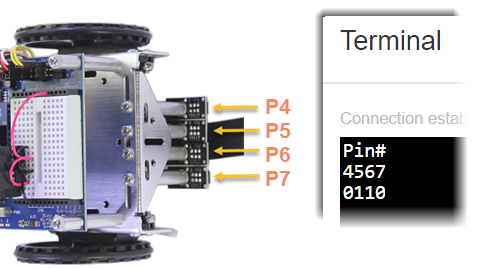 How the QTIs Function Works

The QTIs function starts by setting the I/O pin states for all four QTI sensors to HIGH, with the direction OUT.  This causes each QTI sensor to turn on its infrared LED. The pulse-out PIN 26 pulse length µs 230 block keeps the LEDs on for just a  230 microsecond flash. (We could not use the pause block here, because its shortest duration is 1 millisecond, which is 1000 microseconds).

After that, the I/O pin directions are set to IN (input) for another 230 microseconds.  Each QTI sensor is looking for its infrared flash's reflection, and reports I/O pin as a zero if the reflection is seen and a 1 if it is not.

Then, the states of the four I/O pins are saved in the item variable as a four-digit binary number. So, each time through the drive routine's loop, the QTIs function updates the item variable before it gets used for navigation with the switch...case block.