The number of times per second the BASIC Stamp checks the QTI sensors is an important consideration for line following.  If a given PBASIC program doesn't take enough samples per second, it means it's waiting too long between samples, which can cause the Boe-Bot to miss a sudden change in the line's direction, or even lose the line altogether.  On the other hand, if the program devotes itself entirely to checking the line, there might not be enough time for the BASIC Stamp to check other sensors.  By studying the relationship between sampling rate and line following performance, you can determine the minimum sampling rate necessary to navigate a course with a certain set of features.  You can then use whatever time is left to check other sensors.

For example, you might see the sampling rate of ten thousand samples per second expressed as f = 10 kHz, and its corresponding sample interval would be T = 100 μs.

There are quite a number of adjustments that can be made to existing QTI example programs to make them more efficient and improve their sampling rates.  One of the most important changes involves reducing the amount of time it takes to check the QTIs.  This activity introduces a subroutine for reading multiple QTIs that takes very little time and is especially reliable for detecting black vinyl electrical tape on a white background (see Figure 1 below).  This activity also features a line following example program that uses a subroutine to follow a line with four QTIs. 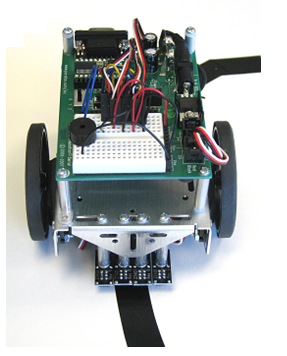 This project contains advanced topics, not intended for Boe-Bot beginners. Before continuing, it is highly recommended you complete the following tasks in order to gain a better understanding on how this application works:

For this activity, you will also need to supply your own:
#2 Philips-head screwdriver
Black ¾-inch electrical tape
White poster board