Input Gives your Robot a Sense of Touch

Have you ever stumbled around in complete darkness, to the point where you stretch your hands out in front of you to avoid tripping over something you can’t see?  Well, right now your Boe-Bot is completely blind.  We can’t give him eyes just yet, but we can give him a simple form of touch with what we call “whiskers”. 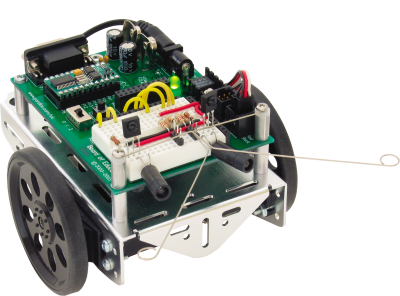 This is a schematic diagram of the circuit that we’re going to build.  It shows the electrical connections between the individual components.  Don’t panic!  It’s not as difficult as it looks. 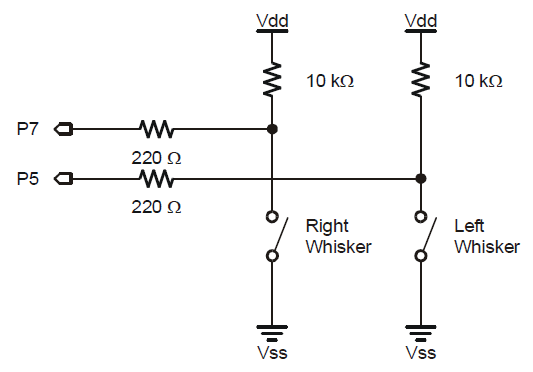 It would be good practice to draw this schematic in your Notebook because you may wish to alter some of the connections later.  Note that the dots indicate that there is an electrical connection at that juncture.  If two lines cross — with no dot — they are not electrically connected.

Here are the components that we’ll be using to build it: 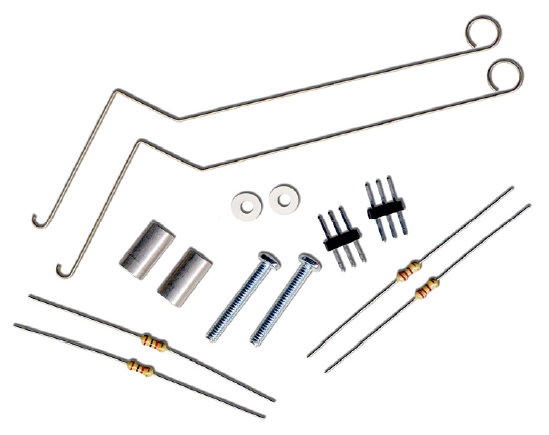 The resistors (the components with the color bands on them) are as follows: 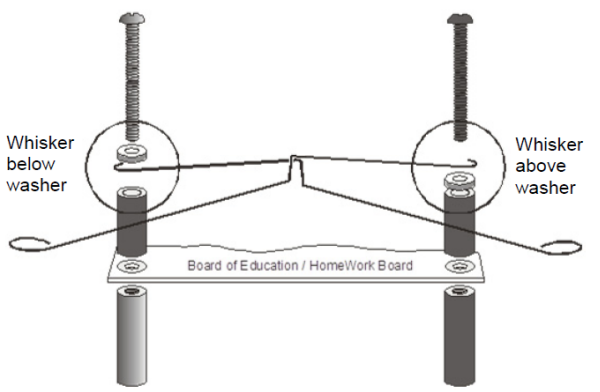 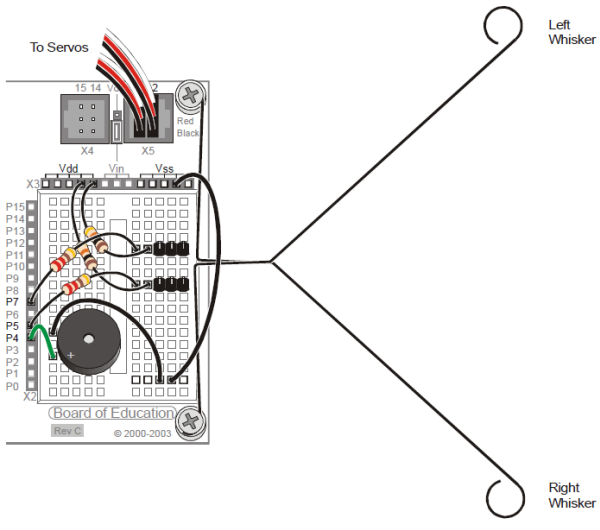 Each of those wires extending out past the Boe-Bot's body act as the contact switches (labeled Right Whisker and Left Whisker). 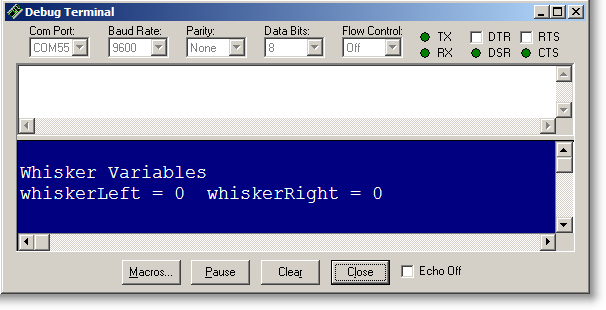 So what’s going on?  Plenty!

This simple exercise shows how a “real world” collision can be detected by your robot.

This is simple intelligence.  You’re giving your robot the ability to make a decision.

What happens just after you press Run?

What happens when you press the whisker enough to cause it to touch the 3-pin connector on the breadboard?

Let’s take look at the program:

Here we have another “DO…LOOP”,  so the program is going to DO something and then it’s going to LOOP back and DO it again.

Therefore, the line of code…

…is executed as follows:

And then of course, “whiskerRight” should react the same for the right wheel.

Your Boe-Bot is sitting there, waiting for something to touch its whiskers.  When something (or someone) does, the Boe-Bot backs away from the offender.

Right now, your Boe-Bot is just sitting there waiting to have one of its whiskers touched.  And once a whisker is touched, the machine wants to back away from whatever is touching it.

This is a classic "detect and avoid" application where the robot can roam freely about, and hopefully! never get stuck!

Thankfully, all three librarians are safe after their grueling, seven hour ordeal.

Early reports reveal that they were in the process of re-stocking shelves, when they inadvertently wandered into the Reference Section.  It seems that the day shift was unable to finish re-shelving their books and left some on the floor.  Oddly, each of the books was stood on edge.  This presented a navigational challenge for the librarians – they got disoriented and were stuck in that aisle until help arrived, many hours later.

You’ve been hired to prevent this from ever happening again.  The Librarians must have a “rescue bot” that can be deployed to show them the way out, should this situation ever happen again.

Keep track of things that didn’t work too.  Sometimes there’s a “happy accident” — a solution that happens by virtue of a mistake.  At the very least, you’ll be able to keep track of methods that don’t work, but sometimes mistakes can end up “shining the light” on a whole new solution.

How about trying to see how straight you can make the robot go.  What can you do to the program that would make it go completely straight?

We've only scratched the surface of what robots are capable of.  You are encouraged to “dive deeper” by going through Robotics with the Boe-Bot in its entirety. Doing so will open you mind to what is possible in the world of robots.  Also, don’t think that a “little robot” is just a “toy”.  The only thing different between a Boe-Bot and a human-sized robot (like in the movies) is the scale.

The Hardware, Software, and programming concepts are the same.  What you've learned on a small scale is directly applicable to a large scale.

As always, document everything you do - Use your Engineering Notebook!  From the idea stage, through the design, prototype, and testing stages - you never know when an unintended "accident" may become a "really cool feature" for you robot's capabilities.

Controlling the Speed of your Boe-Bot chapter