Tactile switches are also called bumper switches or touch switches, and they have many uses in robotics.  A robot programmed to pick up an object and move it to another conveyer belt might rely on a tactile switch to detect the object. Automated factory lines might use tactile switches to count objects, and to align parts for a certain step in a manufacturing process.  In each case, switches provide inputs that trigger some form of programmed output.  The inputs are electronically monitored by the equipments processor, which takes different actions depending on if the switch is pressed or not pressed.

In this chapter, you will build tactile switches, called whiskers, onto your BOE Shield-Bot and test them.  You will then program the BOE Shield-Bot to monitor the states of these switches, and to decide what to do when it encounters an obstacle.  The end result will be autonomous navigation by touch.

Whisker switches give the BOE Shield-Bot the ability to sense its surroundings through touch as it roams around, much like a cat’s whiskers.  The activities in this chapter use the whiskers by themselves, but they can also be combined with other sensors you will learn about in later chapters. 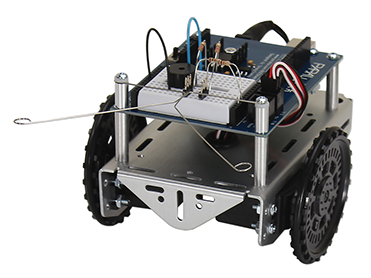