Robots have been in use for all kinds of manufacturing and in all manner of exploration vehicles—and in many science fiction films—for a long time.  The word ‘robot’ first appeared in a Czechoslovakian satirical play, Rossum’s Universal Robots, by Karel Capek back in 1920!  Robots in this play tended to be human-like, and much science fiction that followed involved these robots trying to fit into society and make sense out of human emotions.

Then, General Motors installed the first robots in its manufacturing plant in 1961. Those automated single-purpose machines presented an entirely different image from the human-like robots of science fiction.  As technology continues to advance, increasingly human-like robots designed for socially oriented tasks are emerging, and many types of robots co-exist today.

Regardless of a robot's outer form, building and programming most robots requires combination of mechanics, electronics, and problem-solving.  What you can learn from this tutorial will be relevant to real-world robot applications. Of course there will be differences in size and sophistication, but the underlying mechanical principles, basic circuits, and programming concepts are used by engineers every day.

New uses for robots are emerging constantly. Roboticists are in demand! Get a taste of engineering, mechatronics, and software development as you construct, wire, and program the Shield-Bot, a small autonomous robot. You will assemble the robot and build DIY sensor circuits on the Board of Education® Shield for Arduino.  The Shield-Bot with an infrared obstacle detection circuit built on the shield’s prototyping area is shown below. 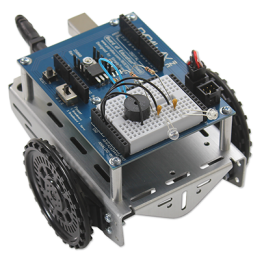 You will start with an introduction to the Shield-Bot’s brain, the Arduino® Uno. Then, you will build, test, and calibrate the Shield-Bot.  Next, you will learn to program the Shield-Bot for basic maneuvers.  After that, you’ll be ready to add different kinds of sensors, and write sketches to make the Shield-Bot sense its environment and respond on its own.