Displaying Bitmaps from the SD Card

So far, this tutorial has shown how to print text and draw shapes directly on the OLED display with a series of blocks.  You can also display bitmap images stored on an SD card. This is easy if you are using the Propeller Activity Board WX, which has an SD card slot built in.

First, you will need a tiny bitmap image! Such images could start as a photograph you take, or as digital artwork you create in other software.  The example below started out as a 3.5 x 5 foot (about 1 x 1.5 meter) acrylic painting that was photographed and then reduced. Here are some tips:

Keep in mind that the OLED is slow to update and will take approximately 20 seconds to fully display an image. 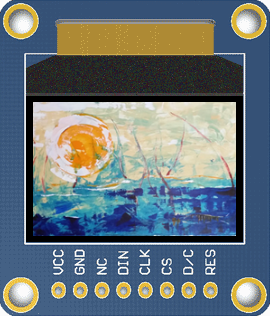 What is the outcome on the screen?

Now what is the outcome on the screen?

If you want to enhance your OLED projects with audio, there are a few things to take into account.   The OLED draw image block and the WAV play block both access files stored on your Activity Board’s SD card. The OLED draw image block lets go of the SD card after fetching the .BMP file, but the WAV play block keeps ahold of the SD card for itself until your file is done playing or you release it with a WAV stop block.

You will need a .WAV file for this next example project. See our Sound Library to download a properly-formatted WAV file. Or, follow the directions there to create or reformat your own.   This example project uses bird.wav.

You should see the image fill the OLED display, then hear the WAV file playing.