Tilt and Acceleration with the MX2125 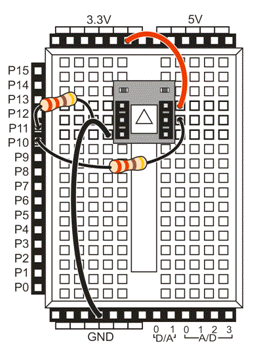 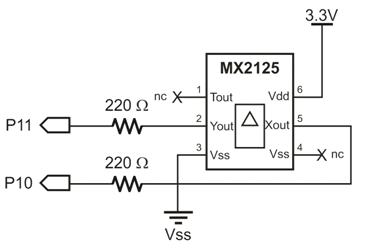 This lesson will work on any Propeller development board with a prototyping area.

The Test 2125 Tilt application reports tilt in two directions: y-axis (left/right) and x-axis (toward/away from you).

The MX2125 sends out two streams of pulses, one for the X axis and one for the Y axis.  These high pulses last about 5000 µs (microseconds) when the board is held level. 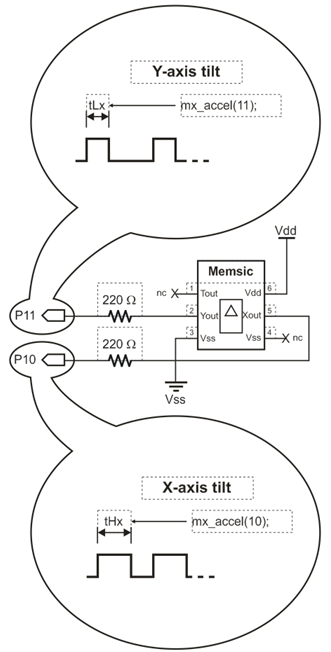 You can add the mx2125 library to any project with the Add Simple Library button. Just click it,  navigate to …Documents\SimpleIDE\Learn\Simple Libraries\Sensor\libmx2125, and click OK.  This incorporates all of the library's files into your project and adds #include "mx2125.h" to your code.

Similarly, int y = mx_tilt(11) gets the y-axis tilt and stores it in a variable named y.

In the example below, these measurements are taken and displayed with a print statement, every 200 ms in an endless loop.

The MX2125 has a tiny chamber inside that’s filled with nitrogen gas.  There’s a heating element in the middle, and temperature sensors around chamber's sides.

As you tilt the MX2125, the hotter gas rises.  The temperature sensor(s) closest to the hot gas detect these higher values.  Circuits inside the sensor use those temperature measurements to control the duration of the high output pulses that a microcontroller can read.

How does this work for measuring acceleration?  First, think about having a partially filled water bottle in a car seat.  As the car accelerates, the heavier water sloshes away from the direction the car is accelerating, pushing the lighter air forward.  The cooler nitrogen gas behaves like the water in your water bottle, sloshing away from the direction the sensor is accelerating.  Also like the water bottle, it displaces the hotter nitrogen gas toward the direction of acceleration.   The temperature sensors pick this changing temperature pattern, and update the output pulse widths accordingly.

You can hold your board vertically in front of you and turn it like it is a steering wheel.  The mx2125 library’s mx_rotate function will return the board's rotation angle in degrees, 0 to 359.

Hint: for character position, you’ll need to use some math on the x and y values to scale them into a range 0 to 20. Then, use print(“%c%c%c*”, CRSRXY, x, y) to place an asterisk in the SimpleIDE Terminal, or print(“%c%c%c ”, CRSRXY, xOld, yOld) to blot out the previously positioned asterisk with a space.