Unlike the Robot drive distance block, which is cause for fixed courses and maneuvers, the Robot drive speed block lends itself to navigation with sensors.  The simplest way to use it is to attach a number value block to its left and right fields.  Each number indicates how fast each wheel should turn in units of ticks per second.  Remember, each tick is 1/64th of a wheel turn and moves the ActivityBot's wheel by 3.25 mm.  After setting the wheel speeds, the Robot drive speed block allows the cog to execute whatever block comes next immediately.  So, if you want your ActivityBot to keep going at a specific speed for a certain amount of time, add a pause (ms) block between Robot drive speed and the next block that sets wheel speeds.

Here are some other tips to remember: 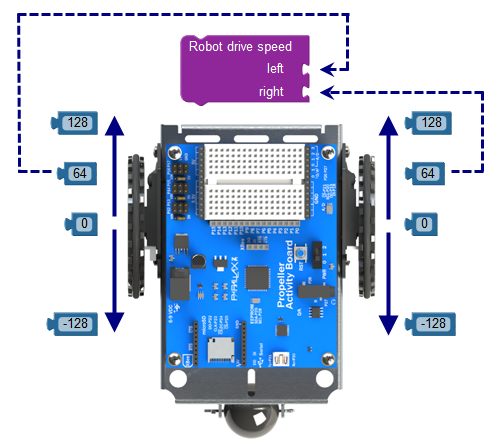 Wheel direction in the rest of this tutorial refers ONLY to turning forward with positive speed values, or backward with negative speed values.  It does NOT refer to clockwise or counterclockwise rotation of the individual wheel cause its case.  A positive value will cause a wheel to turn in the ActivityBot's forward direction.  A negative value will make it turn in the ActivityBot's backward direction. 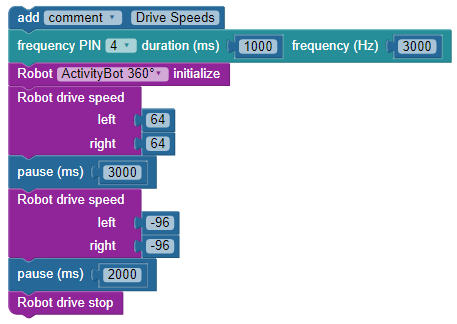 Your ActivityBot should drive forward for 3 seconds, then backward more quickly for 2 seconds.

Did you expect the ActivityBot to return to its exact starting position?  It stands to reason since 64 x 3 = 192 and -96 x 2 = -192.  In a perfect world, that would be 192 ticks forward followed by 192 ticks backward.  In reality, it takes time to speed up during the 3 seconds.  During the next 2 seconds, the ActivityBot has to slow down, then speed back up in reverse.  So, its reverse distance traveled will be a little less.  As was stated previously, when the goal is to travel a certain distance, you should use the Robot drive distance block.  It accounts for speeding up, cruising speed, and slowing down.  The Robot drive speed block only works to maintain wheel speeds.

The comment block holds the project's name. Next, the frequency out block makes a beep on the P4 piezospeaker to let you know the program has started running. The Robot ActivityBot initialize block is required before using other robot navigation blocks.  These three blocks will appear together at the top of most programs that make the ActivityBot move.

The next five blocks define the ActivityBot's maneuvers.

Enforcing the speed limit — No matter what values you attach to Robot drive speed left and right, the C code underlying BlocklyProp will use a maximum value of +/- 128.  For most applications, +/- 96 is a better maximum value.  If you want to lower the maximum value, you can put a Robot set max speed block at the top of your project, which can be useful if you attach variables or equations for the left and right speed values.

Just keep on rolling — Robot drive speed is a "set-it-and-forget-it" block. It starts the wheels turning at the chosen speed, and then code execution immediately continues with the next block that follows. The wheels will keep turning at that speed until another Robot drive block changes or stops them.

Speed vs. velocity — Velocity is like speed, but it can be either positive (forward motion) or negative (backward motion).  Speed itself is just velocity without the sign that indicates direction; velocity's absolute value.

Little things add up — A small variation between what you want your ActivityBot to do and what it does may go unnoticed once or twice, such as going just beyond a target distance or stopping short of a rotation angle. But when these small differences happen one after another, their accumulated effect can be noticeable. Sometimes referred to as error propagation, it is an important concept in robotics, programming, and engineering. And, you may run into it sooner than you think!

So, let's try making the ActivityBot turn in place after going forward by using left 52 and right -52 in the second Robot drive speed block. The left 52 will cause the left wheel to slow slightly, from 64 to 52 ticks per second.  The right -52 will cause the left wheel turn backward at 52 ticks per second, making the robot turn right.  In this example, we are using a pause (ms) 500 block to make the robot turn in place for a fixed amount of time.  Just keep in mind that later, this turning in place time will be determined other things, for example when a sensor detects an opening. 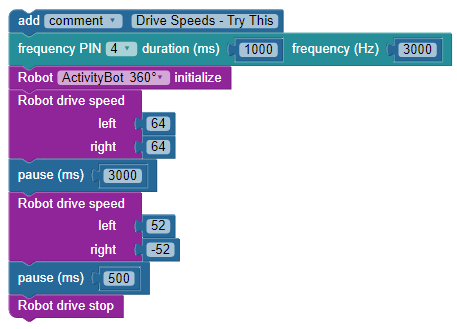 Without any stops and pauses, the ActivityBot's motions seem to blend.  If you ever need motions to be more distinct while using the Robot drive speed block, you can add a Robot drive stop and a short pause (ms) block after each maneuver.

Doing this will give the ActivityBot time to stop after going forward for 3 seconds, and before making the turn.

Another example of something your ActivityBot might do with sensors is to go down a corridor, check for openings to the left and right, and then return.  You can make the ActivityBot do this by combining portions of the two example programs on this page.