Only for FEEDBACK 360° SERVOS!
If you are using external encoders, go to External Encoder Calibration instead.
If your ActivityBot is using Feedback 360° servos, calibration is optional, but it will improve the accuracy of driving maneuvers.  This one-time calibration aids the Robot blocks in measuring and correcting distances and speeds, using information from the servo's feedback connection.

The calibration code takes about one minute to collect all of its data.  You will need a smooth, and obstacle-free, floor area.  While the calibration program is running, the ActivityBot will pivot forward and backward, using only one wheel at a time. It will let you know when it's done by turning off its P26 and P27 lights (below the breadboard).  This video shows an ActivityBot correctly performing the calibration.

Notice that the ActivityBot calibrate block does not have any sockets or plugs for connecting it to other blocks. It is meant to be used by itself without any other blocks in a program, and it takes care of the entire calibration process automatically.

The ActivityBot calibrate block collects requested speed vs. measured speed data and stores it in a part of the Activity Board’s EEPROM memory, where it can retain data even after you turn the power off.  That way, the calibration data is available every time you turn the robot back on. 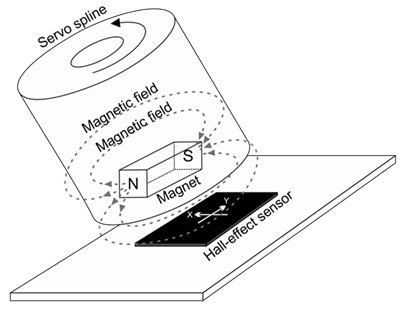 Now that you have successfully calibrated your ActivityBot, it is time to run a simple test program to make it drive straight forward.  The test code below makes both wheels rotate forward at 64 encoder ticks per second for 5 seconds, which should make your ActivityBot roll forward about 1 meter (3 ft.). 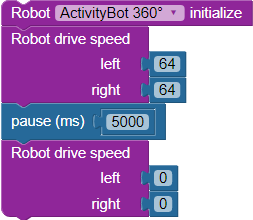 The first block is Robot initialize, with the drop-down menu set to ActivityBot 360°.  Place this block at the beginning of all projects that use other Robot set or Robot drive blocks, even if the example shown is set to ActivityBot.