A transistor is like a valve that regulates the amount of electric current that passes through two of its three terminals.  The third terminal controls just how much current passes through the other two.  Depending on the type of transistor, the current flow can be controlled by voltage, current, or in the case of the phototransistor, by light. 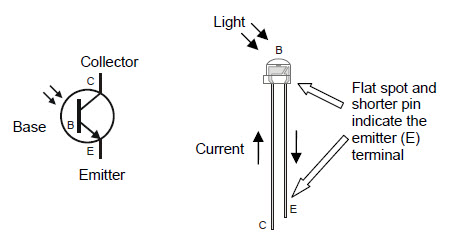 In the ocean, you can measure the distance between the peaks of two adjacent waves in feet or meters.  With light, which also travels in waves, the distance between adjacent peaks is measured in nanometers (nm) which are billionths of meters.  The figure below shows the wavelengths for colors of light we are familiar with, along with some the human eye cannot detect, such as ultraviolet and infrared.

The phototransistor in the Robotics Shield Kit is most sensitive to 850 nm wavelengths, which is in the infrared range.  Infrared light is not visible to the human eye, but many different light sources emit considerable amounts of it, including halogen and incandescent lamps and especially the sun.  This phototransistor also responds to visible light, though it’s less sensitive, especially to wavelengths below 450 nm.

The phototransistor circuits in this chapter are designed to work well indoors, with fluorescent or incandescent lighting.  Make sure to avoid direct sunlight and direct halogen lights; they would flood the phototransistors with too much infrared light.