Print from a Different Core

Up to now, all of our example programs that use print statements have done so from the main routine, which starts executing in cog 0.  This quick lesson shows you how to print from different cores.

The trick is that only one core at a time can use the SimpleIDE Terminal connection, and must be closed before being opened in another.  Sort of like passing the talking stick or speaker's staff from one person in the circle to another at a meeting.

On the Activity Board (original or WX version), the Propeller chip's P30 and P31 pins are pre-wired to the USB port for programming and communication with the SimpleIDE Terminal. Any setup with these connections will work.

The main routine, which is running in cog 0, begins with a print statement that displays the text string in the SimpleIDE Terminal.  Next, simpleterm_close releases the terminal connection for this core, so it can be opened by a different core.  After that comes the cog_run function call to launch the other function in a new core, and the return value is stored in otherCog.

Last comes the other function definition and its code block; this is the code running in a different core. The first instruction opens the SimpleIDE Terminal for this core, so it can display the string in the print statement that follows.  After printing, the next line closes the SimpleIDE Terminal. The last line uses cog_end and the otherCog pointer to shut down the core.

Printing Values Takes Stack Space  — Printing a simple text string from another core doesn't require much stack space. You could reduce the 128 in the example above all the way down to 10, and it might still run .  But, if you want your launched core to check the value of global variables, use them in operations with local variables, and print the results, you are going to need an adequate stack!  We reccommend 128 as a minimum. If your custom print statements do not appear with the as desired, try increasing the stack space in that core's cog_run function call.

Making the Serial Connection Takes Time — If you find that not all of your print statements are showing up as they should, try adding pause(100); right after each instance of simpleterm_open. Your particular computer might need a moment to make the serial terminal connection.

Not Just print! See simpletext.h — There are many other functions in this library that interact with the SimpleIDE Terminal. So, like print, they can be used from one core at a time, after closing and opening the terminal as shown in this lesson.  These include printi, scan, scani, and anything starting with put or get.  See the library's documentation for details.

Let's expand this example program to print from a third core. First, we'll need to add another function (let's just name it "another") with its own print statement.  Then, we can launch it from the other function; in effect passing the Talking Stick. 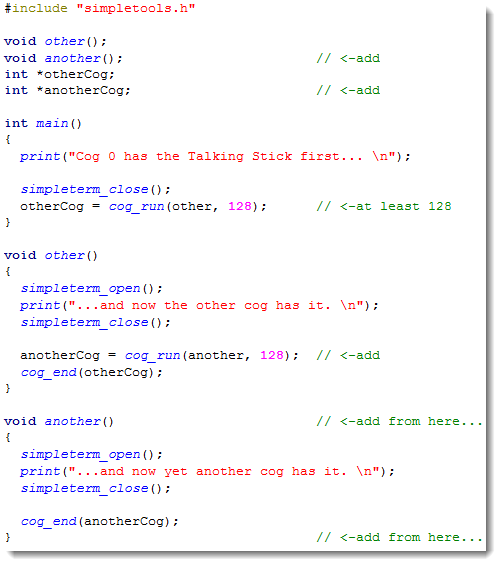 Let's have our three cores access and update a global variable, perform an operation on it, and print the updated value.  You will need to:

Here's an example with a global variable initialized to 0 and increased by one in each core.