The last lesson showed you how to launch a function in another core with cog_run.  Now, let's use its counterpart cog_end to stop the launched function.

We'll keep using the Activity Board's (original or WX version) built-in LEDs on P26 and P27.  See the Blink a Light tutorial for a schematic if you are using a different board.

First, the simpletools library is included to give us access to cog_run and cog_end, along with other functions. Next is the forward declaration for the blink function, which is defined below the main routine.

The cog_run function provides a return value. In this example, a local variable is declared with int *cog  = in front of cog_run(&blink, 128); to capture it.  The asterisk *  indicates cog is a pointer, meaning that the value it holds is actually the address of a memory location. This is the place where the cog_run function call set aside stack space and recorded the ID number of the core it launched.

Next, pause(3000) makes the main routine idle for 3 seconds. Meanwhile, the P26 LED is blinking since the blink function is being executed by another core.  Next comes the function call cog_end(cog);   The cog_end function's parameter uses the cog_run's return value cog. Remember that cog is the memory address that stores the ID number of the core that was launched.  So, cog_end can use the address get the ID number and shut the cog down.

Always Recycle your Cores! — Always use cog_end to shut down a function that is no longer needed, whether or not it is using a while(1) loop. This frees up the core and stack space for re-use by another cog_run function call later in the program, and prevents unexpected results.

Keep it local, save a few bytes — The technique above, where *cog is declared locally and used by cog_end within the same function (in this case the main function), uses fewer bytes than declaring *cog globally.

Go global and delegate — Delcaring *cog globally allows it to be used with cog_end by any function in the application, including those running in other cores. It costs a few bytes more of code size, but frees the main routine from the task (a great advantage of multiprocessing).

As mentioned above, the *cog pointer can be declared globally, allowing it to be used with cog_end by any function in the application.  You can put cog_end right inside the blink function, so the core running that code can shut itself down. 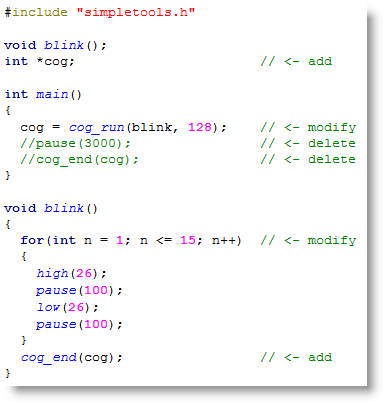 So far, we have tried shutting down a core from the main routine, and having a core shut itself down. Now, let's launch two cores, and have one shut down both itself and the other.

Did it work?  Hint: if your P27 LED didn't stop blinking, take a look at the two cog_end calls in your blink function.  Which one is executed first?