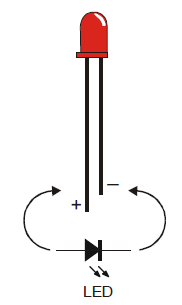 When you build an LED circuit, you will have to make sure the anode and cathode leads are connected to the circuit properly. You can tell them apart by the shape of the LED’s plastic case.  Look closely at the case—it’s mostly round, but there is a small flat spot right near one of the leads, and that tells you it’s the cathode. Also note that the LED’s leads are different lengths.  Usually, the shorter lead is connected to the cathode.

Always check the LED’s plastic case.
Usually, the longer lead is connected to the LED’s anode, and the shorter lead is connected to its cathode. But sometimes the leads have been clipped to the same length, or a manufacturer does not follow this convention.  So, it’s best to always look for the flat spot on the case.  If you plug an LED in backwards, it will not hurt it, but it won’t emit light until you plug it in the right way.