In the previous tutorial, a function you created only ran when the run function block called it.  There are, however, situations where you need a function to run continuously on its own in the background while the rest of the program keeps going. Such a background function might keep watch on a button press or a sensor reading. The Propeller chip can do more than one thing at a time because it is a multicore microcontroller.

With BlocklyProp, the CONTROL > new processor block lets you run a function in its core, while the rest of the program keeps on executing at the same time. 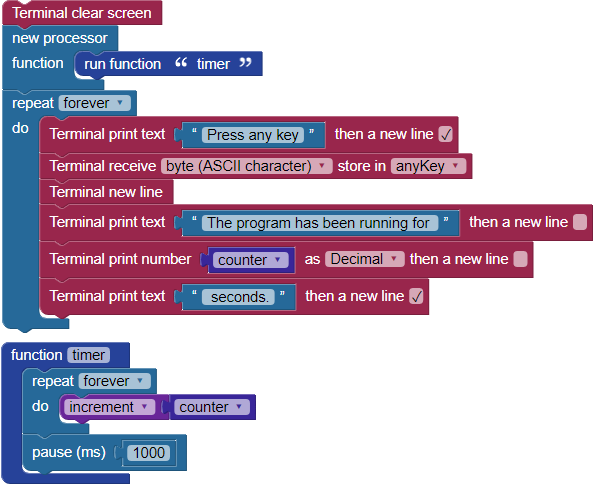 IMPORTANT! You may use only ONE run function block inside each new processor block!The new processor block starts the function named "timer" running in its own processor. It will continue to run its repeat forever loop while code execution in the main program continues.

As the function timer continues to run, the variable named "counter" increases by 1 every second. The rest of the program waits for you to press a key and when you do, it displays counter, which equals how many seconds the program has been running.

The next program you will create is a basic clock.  It will use a new processor block to keep track of the time. The time will be displayed in the Terminal when you press any key. 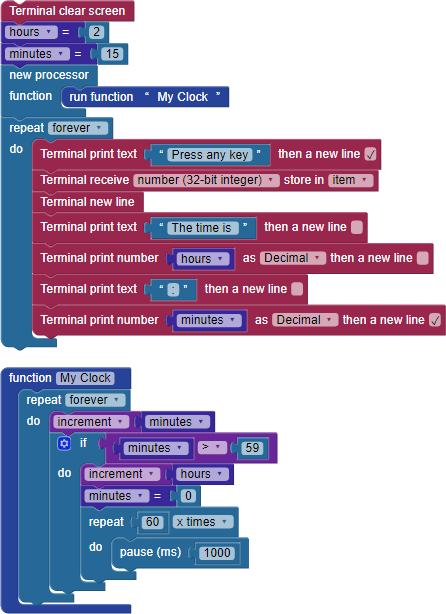 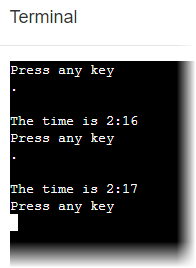 The main program initializes the hours and minutes variables then launches the My Clock function into its own processor. After that, a repeat forever loop displays the time in the Terminal when a key is pressed. It is getting the time information from the My Clock function running it its own core, endlessly. That's why the values of minutes and hours are always up to date when you press a key in the Terminal again.

Variables are still global! Even though the variable counter is set inside a function running in a new processor, it is still accessible from the main program. You can visualize that as though all the variables are written down on the big notepad in the middle of the Propeller that all of the cores can share.

Print from Main ONLY! The Terminal blocks cannot be used in a function that is launched with a new processor block. The same is true for the OLED display module blocks.

Verifying that your new processor started

There are 8 processors in the Propeller microcontroller.  Your main program uses one of them, leaving you up to 7 additional processors that you can use for your own functions. However, there is a bit of a catch. The blocks for some of the sensors and devices use their own processors to operate, therefore leaving you with fewer than 7 extra processors.

A Bit About Multicore chapter