Get Text from Terminal

In Get Values from Terminal, numbers were entered into the SimpleIDE Terminal and stored in variables.  In case you were wondering if something similar can be done with text, the answer is yes.

A sequence of characters is commonly referred to as a character string, and it is often shortened to just string or strings when referring to more than one.  Strings are typically stored in character arrays, and the addresses of the first elements of arrays that contain strings are used for both getting text from the SimpleIDE Terminal and also displaying it.

In addition to entering and displaying strings this activity will introduce one of the many C standard library string handling features, for making comparisons with a password checker.

This code declares a char (short for character) array with 16 elements.  That’s 16 byte elements, each of which can contain a value in the 0 to 255 range.  The values that correspond with printed characters will all be in the 32 to 126 range.  For more info, see ASCII Table 0-127.

Why does getStr stop at 15 characters and not 16?  Given the size of the text array, you might be wondering why getStr limits the characters entered to 15 and not 16.  It’s because C language strings are zero-terminated, meaning there has to be a zero after the last character.  The getStr function automatically appends the text you’ve typed with a zero.  So, if there’s a char array with 16 elements, there’s enough room for 15 characters and one zero-terminator.

After typing the text, this print function then displays it..  The formatting string has %s indicating that it has to print a zero-terminated string.  Since %s is the first formatting flag, the first argument has to have the starting address of an array that contains the characters.  Remember from Variable Values and Addresses that the array’s variable name is used for passing the address of an array’s zeroth element to functions.  So, text is the first argument after the format string.

The three lines of code below all declare the same char array with 8 elements that stores the characters abc123, followed by a zero.  A sequence of characters followed by a zero is commonly called a zero-terminated string.  Even the first declaration, which uses quotes to define the array elements, automatically appends a zero to array[7].  So, there are seven characters, plus a zero terminator that’s built-in.

The simpletools library also includes the string standard C library.  One of the functions in the string library is strcmp.  The strcmp function takes the starting addresses of two zero-terminated strings stored in two character arrays, and returns a zero if they match, or nonzero if they do not match.  Here is an example that prints “Same!” because the two strings match.

The strcmp(pass, text) == 0 comparison returns 1 if it’s true, or 0 if it’s false.  An if statement executes its code block if the comparison returns nonzero.  The logical not ! operator changes zero to 1, and any nonzero value to 0.  So, here is an equivalent statement in a style you are likely to see in published C language examples:

Here is an example that uses zero-terminated strings, scan, and strcmp to make a simple password checker. 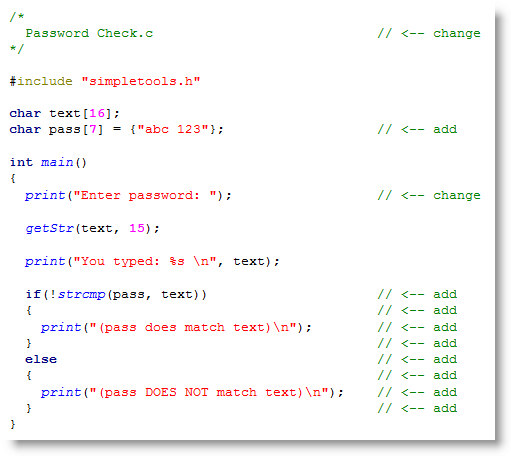 Many computer operating systems, automated teller machines, and other secure devices replace the password characters you type with asterisk * so that people nearby cannot see your password displayed on the screen.  Although neither getStr nor scan have provisions for this, it’s not too difficult to write your own. 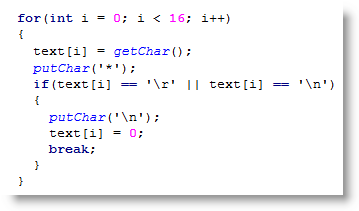 This custom version of getStr behaves almost identically to what getStr actually does.  To make it match the getStr function, simply replace putChar('*') with putChar(text[i]).

Get Values From Terminal chapter