Up to now, we’ve been dealing with what values variables store, but there are some useful functions that need to know where the values are stored instead.  So, to get ready for activities that use those kind of functions, let’s look at a simple way to get the variable’s address in RAM – by preceding it with the & operator.

In this activity, you will also experiment with how addressing of array elements work in the Try This and Your Turn sections.

This test code is not yet in the SimpleIDE/Learn/Examples folder, so follow these instructions for creating a new project with new code:

The program starts by declaring an int variable (named variable) and initializing it to the value 123 with:

In the main function, the first print call displays variable’s value with the expected result of 123.

So, at this point we expected the value to be 123, but what is variable’s address?  A simple “address of” & operator to the left of variable returns its address instead of its value.  The address is the number of bytes from the start of Main RAM.

The addresses in Propeller Main RAM are expressed as byte addresses.  It’s the number of bytes from the start of Main RAM.

This approach works for most variable types, including int, short, byte, and float.

The & operator can also be used to get addresses of array elements.  For example, with the array:

…your code could get the address of the third element (containing 19) with &array[3].  Here is an example of a print statement that displays it:

There is more than one way to get the zeroth element’s address (containing 11).  Although code can use &array[0], it’s more common to just use array.  So, these two print statements do exactly the same thing:

Let’s prove that each array element takes four bytes, and also that array can be used interchangeably with &array[0] to get the starting address of an array. 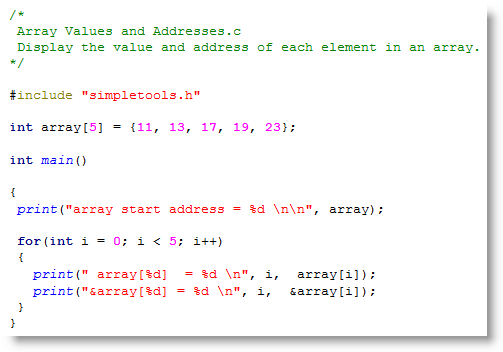 Your modified program’s SimpleIDE Terminal output should resemble this. 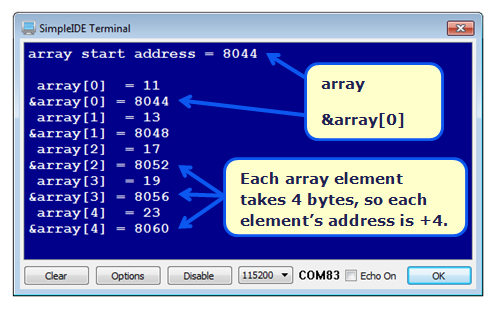 IMPORTANT: Passing the address of the first element in an array by using the array’s name is a very common practice; it is a good idea to get comfortable with it.  Most code examples will use array instead of &array[0] for the starting address of an array.

The Did You Know section mentioned that a char array has one byte per element.