Get Values From Terminal

Now that we know how to get variable addresses, let’s try passing them a function that can do something useful with them.  In this activity, you’ll get to experiment with the scan function to receive a value you type into SimpleIDE Terminal.

The scan function allows you to type values into the SimpleIDE Terminal. It can then convert the characters you type into the value those numbers represent.  For example, after displaying “Enter reps: “ using a print function call, your code can then make a scan function call to load the number you typed into a variable. 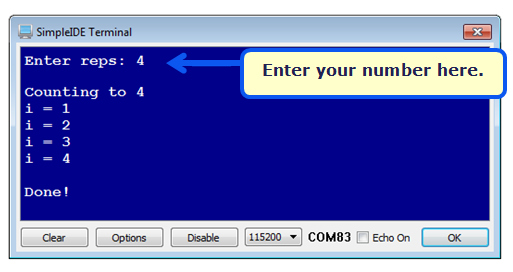 After including the simpletools library, the program declares an int variable named reps that will be used to limit how high the Propeller counts.

The main function starts by printing the “enter reps” message.

This print call helps verify that the scan function did its job by displaying the value reps stores.

The rest of the program counts from 1 to reps, in a manner similar to the Counting Loops activity.

After scan has stored the value at a variable’s address, like &reps, the reps variable stores the value.  So, your code can do things like print("reps = %d\n", reps) to display the value of reps, and for(int n = 1; n <= reps; n++), which uses the value of reps to limit how high the for… loop counts.

Forgetting to use & in the scan function is a very common programming error.

scan is kind of like the inverse of print.  For example, in print("%d\n", reps), the %d would make it display the decimal character representation of the value reps stores, and \n would make it display a newline.  In scan("%d\n", &reps), the %d that tells the Propeller to receive a decimal character representation of a value from SimpleIDE terminal, convert it to an int value, and store it in the &reps memory location.  The one important difference is that print would need the value of reps, but scan uses &reps – the address of the reps variable.

The scan function’s formatting flags have the same meanings as their print equivalents:

You will see more on %c and %s as you progress through Propeller C activities.

There are important differences between scan and print:

For example, scan("%d%d", &startVal, &endVal) will take two values that have to be separated by at least one non-numeric character, and the scan call itself gets completed by \n.  You could input 123, followed by a space, then 127, then press the Enter key.  But, you could also type abcdef123ghijklm127opq followed by the Enter key, and the results would be the same: startVal would store 123 and endVal would store 127.

Here, a single scan function call scan("%d %d\n", &startVal, &endVal) captures two values.  Then, a single print call print("\nCounting from %d to %d.\n", startVal, endVal) displays those two values, and then the for… loop counts from the start value to the end value. 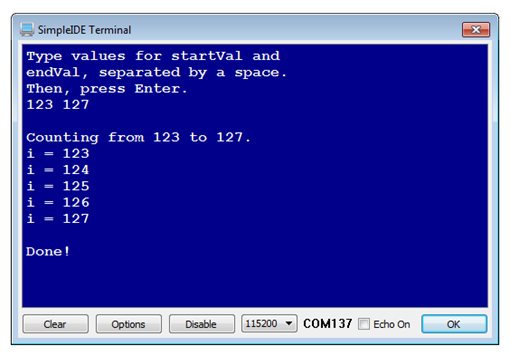 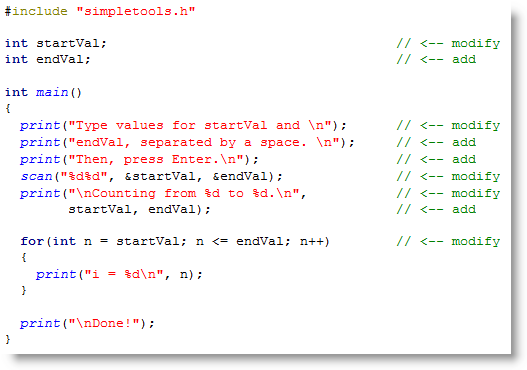 Since scan can be kind of tricky with the scan function’s rule set, let’s try functions from the simpletext library with a simpler set of rules for getting values from the SimpleIDE Terminal. The getDec function does not require pointers, and terminates with a press of the Enter key (meaning that instead of adding a space between each number as you have been doing, you would press enter instead).  So, you could replace the scan code block from the Try This section with code that uses getDec, and end up with the same output in your Terminal Window.

...with these calls to simpletext functions:

Although print and scan provide some convenience with fewer lines of code, there is also a penalty in terms of program size.  Replacing all print and scan calls with equivalent sets of get and put calls, can often significantly reduce the program size.

Variable Values and Addresses chapter Get Text from Terminal