To do the activities in this tutorial, you will need both software and software.

There are several hardware kit options for building a Parallax Shield-Bot.

The Arduino Uno is the preferred module for the Shield-Bot robot.

This tutorial has also been tested with a Duemilanove and original Mega. These Arduino modules automatically decide whether to draw power from USB or an external source (like the Shield-Bot’s battery pack).

If you have an older model Arduino, you may have to set its power selection jumper.  (Don’t worry about this if you have an Uno, Duemilanove, or Mega.) The circuit is labeled PWR_SEL.  It’s three pins with a small cover called a shunt that slides over two of three pins.  For now, make the shunt cover the USB and center pins.  Later, when you switch to using the Shield-Bot’s battery pack, move the shunt to cover the EXT pin and center pin instead.

This tutorial requires the Arduino language 1.0 or higher. There are several recommended software options for using this language.

If this is your first time using an Arduino, Activity #1 will help you get started with your choice of software, connect your hardware, and test your programming connection. The rest of this chapter includes a series of example programs (called sketches) that introduce common programming concepts.  The sketches will do some of the most basic yet important things for a robot:

These examples don’t require interaction with external circuits.  In later chapters you will start building circuits and make your robot move.  You will also learn additional programming techniques like keeping lists of values and writing pieces of reusable code.

Before continuing, is a good idea to make sure you have all of the correct parts to build and program your Shield-Bot. 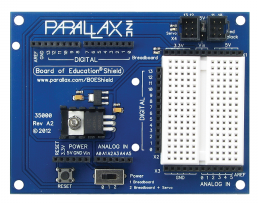 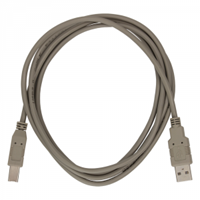 Use the pictures and part numbers on the following pages to double-check the robot chassis parts, small hardware, and electronic components. If you need anything, contact sales@parallax.com.