Some robotics applications require sequences of maneuvers.  You’ll actually see some simple sequence examples in the next chapter when the BOE Shield-Bot detects that it has bumped into an obstacle.  At that point, it has to back up, and then turn before trying to go forward again.  That is a simple sequence with two maneuvers.

Another example is corridor navigation. The BOE Shield-Bot might have to find a corridor and then go through a sequence of maneuvers to enter it,  before searching for the corridor’s walls.

Other sequences can be more elaborate.  One example of a long and complex maneuver would be for a robotic dance contest.  (Robot dance contests have been gaining popularity in recent years.)  For dancing to an entire song, the robot might need a pretty long list of maneuvers and maneuver times.  If your sketch needs to store lists of maneuvers, the variable array is the best tool for storing these lists.

This activity introduces arrays with some simple musical applications using the piezospeaker.  Then, it examines two different approaches for using arrays to store sequences of maneuvers for playback while the sketch is running.

An array is a collection of variables with a common name. Each variable in the array is referred to as an element.  Here is an array declaration with eight elements:

Let’s say your code needs to copy note[3], which stores the value 1397, to a variable named myVar.  Your code could do it like this:

Your sketch can change array element values too.  For example, you could change the value 1976 to 1975 with an expression like this:

An array does not have to be pre-initialized with values like it is in the diagram above.  For example, you could just declare an array with 8 elements like this:

Then, your sketch could fill in the values of each element later, perhaps with sensor measurements, values entered from the Serial Monitor, or whatever numbers you need to store.

The diagram below shows the musical notes on the right side of a piano keyboard.  Each key press on a piano key makes a string (or a speaker if it’s electric) vibrate at a certain frequency. 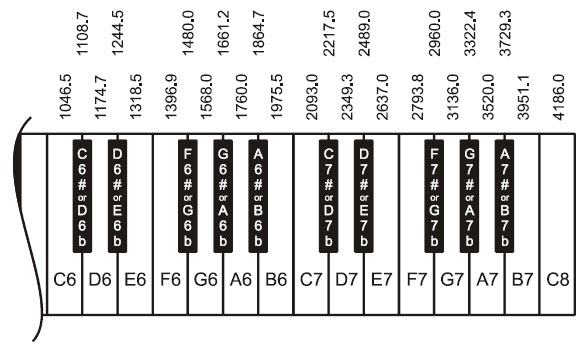 Next, let’s use the array to make your BOE Shield-Bot play some musical notes…