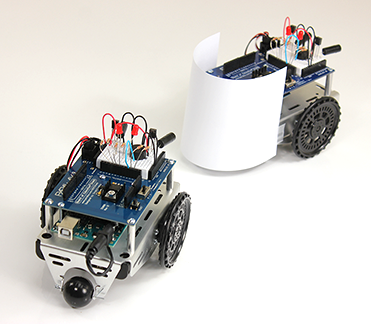 When a machine is designed to automatically maintain a measured value, it generally involves a control system.  The value that the system is trying to maintain is called the set point.  Electronic control systems often use a processor  to take sensor measurements and  respond by triggering mechanical actuators to return the machine to the set point.

Our machine is the BOE Shield-Bot. The measured value we want it to maintain is the distance to the leader-object, with a set point of 2 (for zone 2).  The machine’s processor is the Arduino.  The IR LED/receiver pairs are the sensors that take distance value measurements to the leader-object. If the measured distance is different from the set-point distance, the servos are the mechanical actuators that rotate to move the BOE Shield-Bot forward or backward as needed.

Displaying Both Distances chapter A Look Inside Proportional Control