Once you start creating programs of your own, you may need to have your program do some math. There are a few tricks that are helpful to know about values and operators and how they work in BlocklyProp.

Division (/) will result in 1, which is a bit different than you might expect.  52 ÷ 48 = 1.0833…, but Blockly only works with integers, which are positive and negative whole numbers.  It is essential to know this fact if your program is doing any division.

The last operation, modulus, gives a result of 4.  Modulus is the remainder after division, so if 48 goes into 52 one time, the remainder is 4.  Sometimes, it is helpful to use both division and modulus in your program if you need to divide numbers.

The rule of operations states that any multiplication will happen before any addition, so that in the statement 5 + 6 * 3, the 6 and 3 will be multiplied first (6 * 3 = 18), then the 5 will be added, resulting in a value of 23.  What if you need the addition to happen first?  If you were doing this math problem on paper and you wanted to make sure the 5 and 6 were added first and then that answer was multiplied by 3, you would write it like this: (5 + 6) * 3.  The parentheses indicate that you should do the math inside of them first.  In Blockly, you can force an operation to be done first by "nesting" it.  To “nest” a math operation block, you place one math operation block within another math operation block.  It is much like the nesting dolls pictured below. 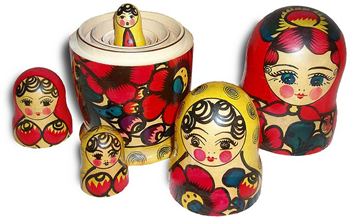 Let’s build a program with three terms and two operations: an addition and a multiplication. To help you understand how nested math operation blocks work you will group the terms two different ways, which will give two different answers.

After the program loads, the terminal will display:

Why are they different? See if you can figure it out. If you are not sure, keep reading!

It’s a matter of what your BlocklyProp program evaluates first.

Write a program that solves and displays the answers to the following problems. Choose your block nesting carefully to get the same answer you would using the standard order of operations: