The example program on the previous page moved the ActivityBot's wheels at the same speed but opposite directions - one forward and one backward - to make the robot turn. Other wheel speed/direction combinations perform other kinds of turning maneuvers. Turning maneuvers can be grouped into three general categories:

Wheel speeds are equal, but velocity is opposite to make the ActivityBot turn about its center.  This rotation is great for making the robot face a new direction in a tight place and without changing its position. Imagine a pen going through the center of the ActivityBot's "axle." A rotating turn would not draw any curved lines; it would just rotate on this point making the dot darker! You could think of this as an arc with a radius of zero.

With arcs, both wheels are turning but at different speeds.  They may be moving in the same or opposite directions.

Opposite-direction tight arcs: If the wheels are going in opposite directions, the arc created by our imaginary centroid-pen would have a radius between zero (if the speeds were almost the same like a rotating turn) and 53 mm (if one wheel speed is set to almost zero, like a pivot turn).

Same-direction wide arcs: If the wheels are turning different speeds but the same direction. Going back to the imaginary centroid-pen, the radius of such arcs can be anything from about 53 mm to theoretically infinite. The closer the speeds are to each other, the larger the arc radius will be. (Of course, if the speeds are equal, the trajectory is straight.)

This program progresses through the four types of turns described above.  The ActivityBot will come to a stop and beep between each type of turn so you can more easily see the relationship between the blocks and the maneuvers. 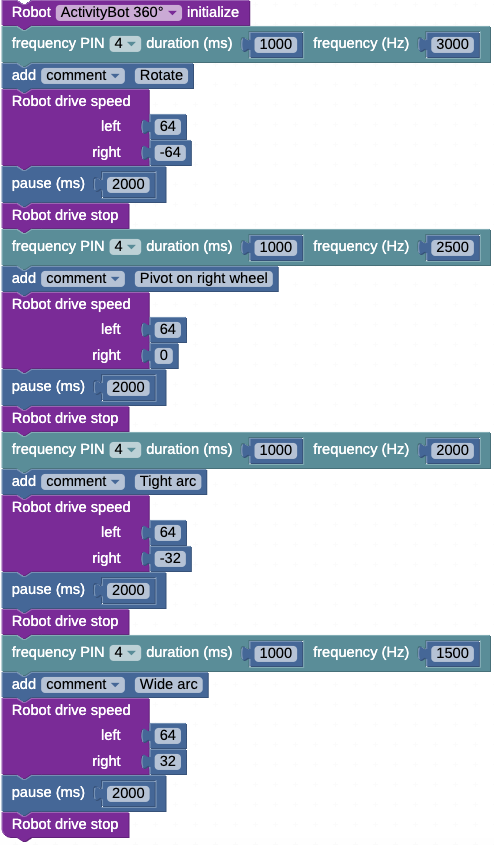 After the required Robot initialize block, the rest of the code is divided into four sections of five blocks each.

Variable Speeds — The Robot drive speed block will accept any block for its left or right fields that resolves into a number value, such as variables and equations. Using a variable for a driving speed can allow the maneuvers to change during runtime without additional blocks. Remember also that the block's underlying C code libraries automatically limit the range to +/- 128, and that you can limit the range further with the Robot set max speed block.

The following example project keeps one wheel's speed steady while gradually reducing the other with a variable. Can you predict what the maneuver will be like? 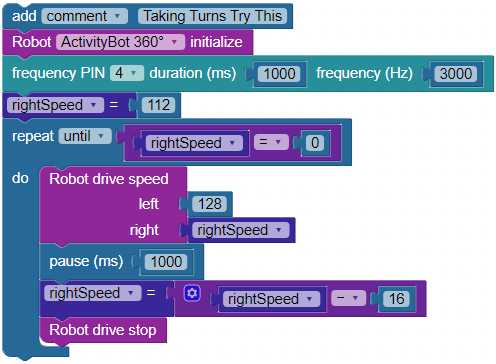 Did your ActivityBot do what you predicted?

To thoroughly understand turning maneuvers, make copies of the Taking Turns project under new names, and try the following variations: