The Forces Involved in Flight

There are a lot of different things that fly, some of them in nature and others that are man-made. Each of them use the same set of forces to help them get off the ground and into the air.

The simplest flying man-made object is a balloon. By filling a very light balloon with something that is lighter than air, such as hot air, hydrogen, or helium, the balloon will float. Gravity pulls down on the balloon, but not very hard because the balloon is very lightweight. A helium balloon also experiences lift because of something called buoyancy. 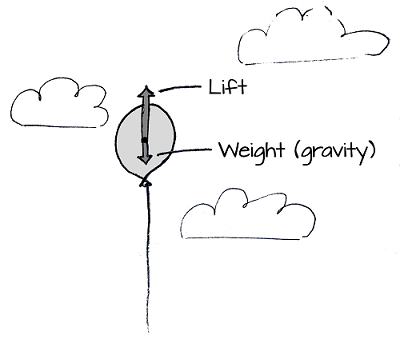 The problem with a helium balloon is that there is very little that can be done to control where the balloon goes other than up. Imagine attaching a couple of fans to the balloon. A large enough balloon will balance out the additional weight of the fans, and the fans will provide thrust. Thrust is a force that pushes the balloon in a desired direction. When the balloon begins moving forward from the the thrust, the balloon will also begin to experience drag. 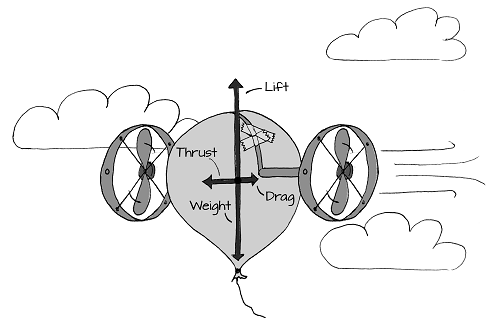 The amount of drag an object experiences depends on a number of factors:

The actual formula is:

All flying objects experience the same basic four forces: Weight, Lift, Thrust, and Drag. By controlling one or two of these forces, aircraft can fly and move through the air. Different types of aircraft use different engines and mechanisms to generate and change these forces, and each method has advantages and disadvantages. There are several different types of aircraft:

An airplane’s lift is created by its wings. Wings on an airplane have a special shape (similar to the wing of a bird) that generates lift when it moves forward through the air. The shape of an airplane wing is called an airfoil. The top of an airfoil is longer than the bottom. The longer top reduces the pressure of the air above the wing, and since the air below wing is at a higher pressure, it pushed the wing up, generating lift:

By tilting the wing or changing the shape of the wing, it can change the amount of lift it generates, allowing to plane to go up or down (or if one wing pushes up and one pushes down, to tilt or turn).

Because a plane cannot lift without moving forward, it is not possible for most airplanes to hover. Hovering means staying still in mid-air. Helicopters are able to hover because instead of moving the whole aircraft, they only move the wing. On a helicopter, the wing is called a rotor, and it is spun rapidly in order to generate the lift needed for the helicopter to fly. 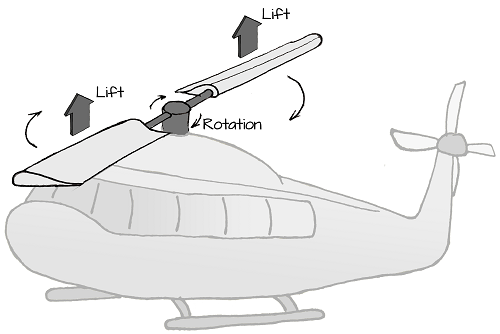 All of that rotation is actually a problem for the helicopter. Without some additional help, the rotation of the helicopter’s rotor will cause the helicopter itself to begin rotating in the opposite direction (more on that later...)

Do you remember all of the forces acting on the balloon-fan aircraft? 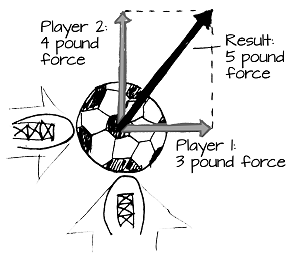 Just like in the soccer ball example, the forces in the balloon-fan aircraft are all added together to find the remaining resultant or net force acting on the aircraft.

Educators: for more information, The Physics Classroom has additional information on the addition of forces here.  Search online for "air resistance practice problems" for additional worksheets and problem sets.