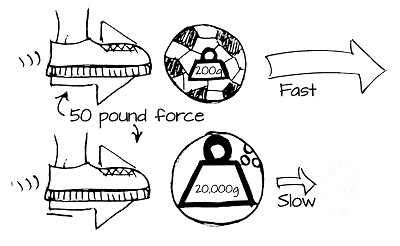 For the same force, a large mass only accelerates a small amount, and a small mass will accelerate a large amount:

The following experiement will help you understand the relationship between force, mass, and acceleration.  To do this experiment, you will need the following materials:

Effect of force on mass:

Observe that when mass is increased, the same force cannot accelerate (and therefore move) the blocks as far.  Increasing the mass decreases the acceleration.

Effect of force on acceleration:

Observe that the block moves the longest distance when the ruler's incline is steepest. This is because the steepness of the ruler increases the acceleration of the ball, which in turn increases the force it can apply to the block.

Can you think of additional ways to test the relationship between force, mass and acceleration?