ASCII and Other Simple Ciphers

The simple ciphers we examine in this tutorial are called monoalphabetic substitution ciphers, where one character always maps to some other letter in the adjusted alphabet.

In addition to the Caesar cipher, you will see names like Atbash, Affine, Beaufort, Hill, and others.  Here, you can experiment with Atbash, mixed alphabet, and a very useful variation on the Caesar shift cipher that uses ASCII characters.

The Caesar cipher works well as an introduction to ciphers, but it’s not overly practical.  With only 25 keys and every word separated by a space, it’s definitely one of the easiest ciphers to crack.  The Caesar cipher is also not a very good fit for encrypting radio data since CAPS LOCK letters with no other characters or spaces would make a script to send an encrypted version of this dictionary really difficult:

The ASCII Shift Cipher works on all printable characters, including spaces, so that dictionary string would be no problem to encrypt and decrypt with ASCII Shift.  Although it’s still considered very weak in the encryption world, 93 different keys is still more secure than 25. 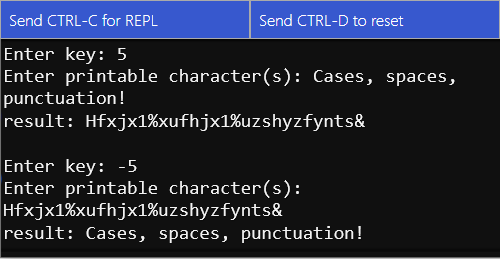 Assuming you are just making use of the function, all your script has to do to encrypt some text is this:

Like the caesar function, ascii_shift also has arguments for a key and text parameters that accept strings.  Unlike the caesar function, the string you pass to text can contain all printable characters including spaces, digits, punctuation, and other keyboard symbols.  The ascii_shift function also has a for letter in text loop that does the shift operation on each character and adds it to a result string, which was declared as an empty string variable before the loop.

Inside that function, the main difference is this statement:

That single statement does the same job as these five:

Unlike the Caesar cipher, which started with characters indexed as 0…25, the printable ASCII characters are in a range of 32…126.  The modulus operator trick doesn’t work right if your alphabet doesn’t start with an index of 0.  So, it has to subtract 32 before ascii = ascii % 94, then add 32 afterwards.  Here is a breakdown of each step: