To emit sound, the cyber:bot uses a device called a piezoelectric speaker (piezospeaker). This speaker can make different tones depending on the rate of high/low electrical signals it receives. The schematic symbol and part drawing are shown below.

A piezoelectric element is a crystal that changes shape slightly when voltage is applied to it.  Applying high and low voltages alternating at a rapid rate causes the crystal to rapidly change shape.  The resulting vibration in turn vibrates the air around it, and this is what the ear detects as sound.

Some electronic drum sets use piezoelectric elements to detect when, and how hard, a drummer has hit a sensor.

Piezoelectric elements, depending on their shape and thickness, have a frequency at which they naturally vibrate.  This natural vibration can be used to create voltages at set frequencies that function as the clock oscillator for many computers and microcontrollers. If you have ever seen a clock or watch that says “quartz”, there is a piezoelectric quartz crystal inside. 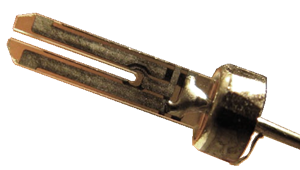